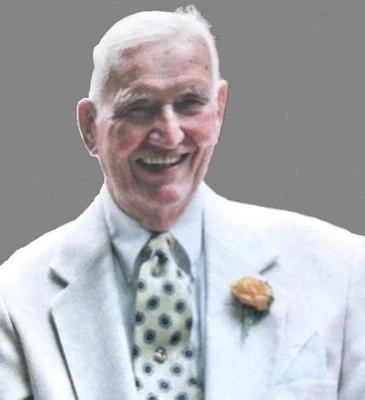 He was born in Kenmore, New York on August 7,1927, son of the late Robert McLernon and Katherine Wright McLernon. He was the brother of Samuel McLernon and Richard McLernon who are deceased and a sister Katherine Holler. Jim was a graduate of Kenmore West High School as was his wife of 51 years Nancy A. (Stilwell) McLernon who passed away in 2001.

Mr. McLernon served in the Navy Air Corp during World War II. He was very proud of his service and often told stories about the reconnaissance missions he flew on.

Mr. McLernon began his 48 year career in the automotive industry as an hourly worker at the Chevrolet Tonawanda Plant in New York. He attended night school at the University of Buffalo receiving his degree in Industrial Engineering. He rose rapidly through the ranks at General Motors and became General Manager of the Chevrolet Division in 1968.

After 27 years at General Motors, he was recruited in 1976 to be the first President of Volkswagen of America. In 1978 he opened the VW manufacturing plant in New Stanton, PA. and also managed the distribution of Audi and Porsche. He resigned from VW in 1982.

Mr. McLernon went on to be the Executive Vice President at Creative Industries and had significant impact on increasing sales to their automotive and aerospace customers before the company was acquired by Masco Industries.

During the late 1980's Mr. McLernon was chairman of South Charleston Stamping and Manufacturing a wholly owned subsidiary of the Park Corporation. Through his leadership this role evolved into the creation of the American Axle Corporation. Founded with his partners and good friends Raymond Park and Morton E. Harris. Five closed General Motors manufacturing plants were acquired to start American Axle. In 1996 the new company exceeded $2 billion in revenues. Mr. McLernon was proud to have reopened these manufacturing plants which provided jobs and economic benefits for many communities. He retired from his position as Chairman of the Board of American Axle in 1997.

Mr. McLernon was a strong supporter of his Alma Mater the University at Buffalo, where he received a B.S. in Engineering. He always felt indebted to the university for providing the education that lead to his success. In 1978 he established the James and Nancy McLernon Superior Scholars Endowed Program. In 2007 he established the Nancy McLernon and Samuel R. McLernon Memorial Scholarship Programs for the Colleges of Engineering and Nursing for graduates of Kenmore West High School. He was awarded an Honorary Doctorate of Humane Letters and the Samuel P. Capen Award for Distinguished Alumni. Mr. McLernon served as the Director of The University at Buffalo Foundation.

Over the years Mr. McLernon was recognized for his exemplary management style and expertise in manufacturing. In 1981 he received a Distinguished Service Citation and was entered in the Automotive Hall of Fame. Lawrence Technological University also granted him an Honorary Doctorate in Engineering.

Mr. McLernon was nothing if not humble and incredibly optimistic. He always looked for the best in people. He had an amazing memory for names and treated every person the same no matter their station in life. This lead to him having many wonderful friendships.

Starting in 1968 he supported the Boys and Girls Club of Southeastern Michigan by serving on the board and leading many successful efforts to secure corporate donors.

The family would like to express their gratitude to Dr. Ishmael Jaiyesimi and Dr. Michael P. Maddens who were so kind and attentive to their father. They would also like to thank the staff at Beaumont Hospital who worked with their father during this very challenging time of the Coronavirus. Sincere appreciation is also offered to Hospice of Michigan who assisted in getting him home for his final days and to Rev. Bill Danaher for providing spiritual support.

A celebration of his life will be held at a later date. Memorial contributions in Mr. McLernon's honor can be made to the charity of your choice or The Boys and Girls Club of Southeastern Michigan, Christ Church Cranbrook, St. Marys Episcopal Church Stuart, Florida or Rose Hill Center Holly, Michigan.


Published by The Detroit News & Detroit Free Press from Mar. 31 to Apr. 5, 2020.
To plant trees in memory, please visit the Sympathy Store.
MEMORIAL EVENTS
To offer your sympathy during this difficult time, you can now have memorial trees planted in a National Forest in memory of your loved one.
MAKE A DONATION
Please consider a donation as requested by the family.
MEMORIES & CONDOLENCES
4 Entries
James always met his friends with a greeting of a warm smile and good words. He will be missed by the Willoughby Community.
Donovan Essen
Neighbor
December 23, 2020
My condolences to the family. I was sorry to read about his demise. May he Rest in Peace. My thoughts and prayers are with his family.

I met Mr. McLernon when I was employed by VW de Mexico, SA de CV. He and the President of VW of Canada came to the plant in Puebla for the Celebration of the 1 millionth VW car produced. Being one of the few Americans employed in the Export Division in VW Mexico, I had the privilege and honor of greeting and assisting with the arrival of the two North American VW dignitaries. Mr. McLernon was very kind and a gentleman in every sense of the word. I remember that he shared with me that he had a daughter named Elizabeth; I believe he called her Betsy.

Sincerely,
Elizabeth Orozco-Wittke
Elizabeth Orozco-Wittke
May 26, 2020
My condolences to the family. This was a really nice summary of his life. I only knew/met your dad for a bit as you moved from Williamsville to Michigan. I remember his height being tall and he had a professional air about him. May the good memories keep you with a smile and I wish the best for his next journey.
Love,
Patty Corp-Coleman
Patricia Coleman
April 6, 2020
I was a GMI co-op student at a Chevrolet plant in the early 1970s and one of my prized possessions that I have kept to this day is a letter from Mr. McClernon congratulating me on my graduation.