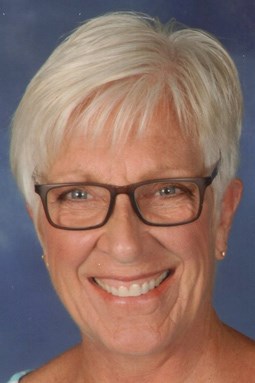 Janice C. Bedient, age 66, of York, Nebraska, went to her eternal rest on Monday, July 12, 2021, in York. She was born to Robert and Marilou (Wylie) Johnson in Kansas City, Missouri, on March 10, 1955. Jan graduated from Fremont Bergan High School in 1973. She was married to Ed Pullen and in this union, they had two children - Matt and Megan. She was joined in marriage to Bob Bedient on Aug. 19, 1989, and with his two children - Chris and Tony - the combined family became known as Bob, Jan and Tribe.

Jan was an active member of the York community, especially within St. Joseph Catholic Church, and as a long-time member of Does Drove #7 of which she was a past President. Like many, she had a love/hate relationship with golf. Of no doubt was how much she enjoyed spending time with family and friends, especially her grandchildren. Jan's other interests included a daily run/walk, growing zinnias, and most of all her job as a barber where she valued the many lifelong friendships she developed behind the chair.

She was preceded in death by her parents, Bob and Marilou Johnson; in-laws, Dick and Kappy Bedient; daughter-in-law, Jessica Bedient; and sister-in-law, Glenda Hauser.

A Mass of Christian burial will be held at 10 a.m. Wednesday, July 21, at St. Joseph Catholic Church in York with the Rev. Tony Bedient officiating. Inurnment will follow in St. Joseph Cemetery. A Rosary service will be held at 7 p.m. Tuesday night at the church with Jan's family greeting friends prior to the Rosary starting at 5:30 p.m. It was Jan's wish to be cremated so there will be no viewing. In lieu of flowers or plants, memorials may be directed to the family for later designation. Online condolences may be directed to her family at www.metzmortuary.com. Jan's service will be livestreamed on our Facebook website starting just before services.

To plant trees in memory, please visit our Sympathy Store.
Published by Fremont Tribune on Jul. 14, 2021.
MEMORIAL EVENTS
Jul
20
Visitation
5:30p.m.
St Joseph Catholic Church
, York, NE
Jul
20
Rosary
7:00p.m.
St Joseph Catholic Church
, York, NE
Jul
21
Mass of Christian Burial
10:00a.m.
St Joseph Catholic Church
, York, NE
Jul
21
Inurnment
St. Joseph Cemetery
, NE
Funeral services provided by:
Metz Mortuary
MAKE A DONATION
MEMORIES & CONDOLENCES
Sponsored by Metz Mortuary.
4 Entries
I´m so sorry for your loss! Jan was quite a gal, fun to talk to..we would laugh a lot..I will miss her.
Marilyn Coffey
Friend
July 20, 2021
So sorry to read about Jan´s passing. Always enjoyed visiting with her. Prayers to the family.
Kay Zoucha
July 16, 2021
Dear Bob, Matt, Megan, Chris, Tony and families, Your dear Jan was an inspirational gal! She was always happy and loving to all. We loved visiting with her as she ran "the alley " by our home:) We will keep you all in our prayers. You are all loved.
Ken and Mary Beth Kunze
Friend
July 16, 2021
So saddened for the loss of my cousin, Jan. May our Lord bring you comfort.
Dave and Bobbie Johnson
Family
July 15, 2021
Showing 1 - 4 of 4 results