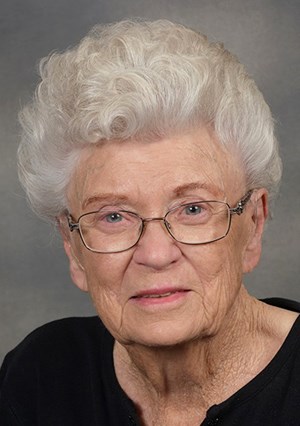 June was born to Louie and Minnie (Siebrasse) Henry on June 11, 1928. She was the oldest, with a younger brother, Clyde, and little sister, Bonnie. She graduated from Fremont High School and cosmetology school in Grand Island. There she met the brother of one of her classmates, Bill (William) Stratman, and married him on Aug. 14, 1949. They were married over 25 years and had three children: Larry, Cheryl and Emily. Bill tragically died of cancer in 1977.

In 1989, she married Don Nelson. With him she was able to travel to Hungary, Germany, Austria and Hawaii when she accompanied him with his work for Valmont. She also traveled on her own to visit her daughter in Alaska. As members of the Midwest Early Corvette Club, they traveled to Colorado for "Vettes on the Rockies," western Nebraska and even to the 50th Corvette Anniversary celebrated at the Indy 500, being the representative car for 1986.

June loved her career as a beautician and worked until she was 88 years old. Early on, she worked at the iconic shop "Alberta's" and was there at work when the Pathfinder Hotel exploded. Afterwards she worked at Caro-Laines shop. She finished her career with Denise Taylor at Styles Unlimited, where she was fully appreciated, even with her name on the front window!

During the middle of her life she joined the service and education sorority, Beta Upsilon chapter of Epsilon Sigma Alpha, Int. invited by her cousins Joan Scott and Joyce Siems. They all worked hard to accomplish their goals, and had a ton of fun together.

June was a life-long member of First Lutheran Church of Fremont. She was a member of one of the "Circles" and was always willing to provide food or serve at gatherings whenever she was asked. June loved to read and spent many, many happy hours creating beautiful counted cross stitch needlework masterpieces.

Not always a happy-go-lucky person, June endured growing up during the Great Depression, and the tragic suicide death of her father in her early 20s. She definitely learned to work hard and had an incredible amount of inner strength. She showed her love and care for family and friends until the very end of her life at 93 years old.

June is survived by her husband, Don Nelson; her sister, Bonnie Strauss; and her two daughters, Cheryl and Emily, (her son Larry passed in 2013); plus Don's children, Pam and Dan. Altogether she had nine grandchildren: Isaac, Amos, Talitha, Noah, Sawyer, Angie, Alyssa, Ashley and Sammy; plus eight great-grandchildren.

June will be greatly missed by her family and friends.

Visitation at the Ludvigsen Mortuary Chapel in Fremont will be Tuesday, July 13, from 3 p.m. to 8 p.m. with the family present from 6 p.m. to 8 p.m. The funeral will be 10:30 a.m. Wednesday, July 14, at First Lutheran Church in Fremont. Burial will follow in Memorial Cemetery.

To plant trees in memory, please visit our Sympathy Store.
Published by Fremont Tribune from Jul. 9 to Jul. 10, 2021.
MEMORIAL EVENTS
Jul
13
Visitation
3:00p.m. - 8:00p.m.
Ludvigsen Mortuary - Fremont
1249 East 23rd Street, Fremont, NE
Jul
14
Funeral
10:30a.m.
First Lutheran Church
, Fremont, NE
Funeral services provided by:
Ludvigsen Mortuary - Fremont
MAKE A DONATION
MEMORIES & CONDOLENCES
Sponsored by Ludvigsen Mortuary - Fremont.
2 Entries
Dear Family, You all have my deepest sympathy. June was a very nice lady and good friend. We had some good times when Harris and Bill were at the F.D. and at "IRV'S and Eagles . I loved her Christmas village she was always of proud of . I will miss her Christmas cards we sent each other every year too. I know how much you will all miss her too. Much love to you all. Diane
Diane Harvey
Family
July 10, 2021
Offering our deepest condolences during this difficult time.
Ludvigsen Mortuary
July 10, 2021
Showing 1 - 2 of 2 results