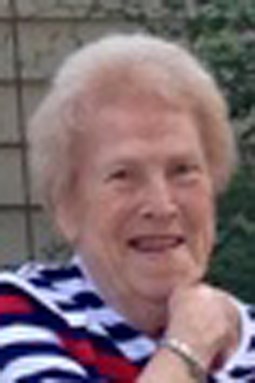 Burial of ashes will be at Ridge Municipal Cemetery in Fremont, Nebraska, at a later date.

Pat was born on June 15, 1929, in Fremont to Charles and Phyllis (Widman) Reis. She was the youngest of 4 children.

She was married to Ted Tedrow in 1947 and this ended in divorce. From this union, Pat had a daughter, Kimberly (Bogenreif). She later was married to Jim Wagner in 1969 and they were married until his death in 1999. Pat moved from Fremont to Elk Point in 2003 to be closer to her family.

Pat worked most of her life in the cafeteria for Fremont elementary schools. Prior to that, she worked at the Hormel Credit Union. She loved to garden with flowers and vegetables. She basically loved and enjoyed her family and spent as much time as possible with them. The only hobbies she had were reading, gardening, and playing keno once in a while. She always had a beer before her supper. She was of Catholic faith and still a member of St. Patrick's Catholic Church in Fremont, even though she attended St. Joseph's in Elk Point.

She was preceded in death by her parents; husband, Jim Wagner; a sister, Shirley O'Donnell; two brothers, Charles and Ole Reis; and one granddaughter, Aubrey Bogenreif.

Kober Funeral Home of Elk Point has been entrusted with the service. Condolences may be posted online to www.koberfuneralhome.com.

To plant trees in memory, please visit our Sympathy Store.
Published by Fremont Tribune on May 4, 2021.
MEMORIAL EVENTS
No memorial events are currently scheduled.
To offer your sympathy during this difficult time, you can now have memorial trees planted in a National Forest in memory of your loved one.
Funeral services provided by:
Kober Funeral Home - Elk Point
GUEST BOOK
Sponsored by Kober Funeral Home - Elk Point.
0 Entries
Be the first to post a memory or condolences.