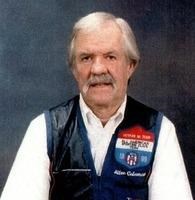 FUNERAL HOME
Whitehurst Sullivan Burns & Blair Funeral Home
836 E. Nees Ave.
Fresno, CA
UPCOMING SERVICE
Graveside service
Oct, 22 2021
2:00p.m.
Washington Colony Cemetery
Send Flowers
Allen Coleman
August 9, 2021
Reedley, California - Born Oct. 22, 1930, Allen was raised in the Navelencia area and graduated from Reedley High. He also attended Reedley College and Fresno State. He grew up helping his parents with dryland farming and raising livestock. To make extra money, he ran a trap line selling furs. He also competed in bull riding at the Cow Palace. Allen passed unexpectedly on August 9th at 90 years old after heart surgery.
Allen was drafted into the Navy Seebees in 1950, but before deploying to Korea in 1951, he married the love of his life, Marjorie Dixon. After honorable discharge, he continued in the heavy equipment construction industry. He was a superintendent for Langworthy Paving for many years and became a general engineering contractor. With the success of his company, he and Marjorie were able to travel the world and pursue other interests.This included skiing and competitive shotgun sports. He made Team USA as well as the All-American Shooting Team and represented the USA in competition in many countries.
Allen grew up hunting and continued it throughout his life. He completed hunting trips in 2021 and had five more hunts he was looking forward to. He was passionate and forceful in everything he did. After they made Allen, they broke the mold. His strength of will was unparalleled.The word 'no' or 'can't' were not words he understood. If you were in the same room with him, you knew he was there.
Allen was deeply involved in AA for over 50 years and was instrumental in helping many into recovery.
Allen is preceded in death by his wife, Marjorie and son, David. He is survived by his daughter Lynette Statham (Dennis), son Mark (Kathleen) and his sister, Barbara. He has four grandchildren- Hunter and Tanner Statham and Bryant (Cassie) and Allison Coleman.
Whitehurst Sullivan Funeral Home is coordinating a graveside service on Oct. 22nd, 2pm at Washington Colony Cemetery near Easton. A gathering to celebrate Allen's life was held at the Coleman Ranch on Sept.4th.