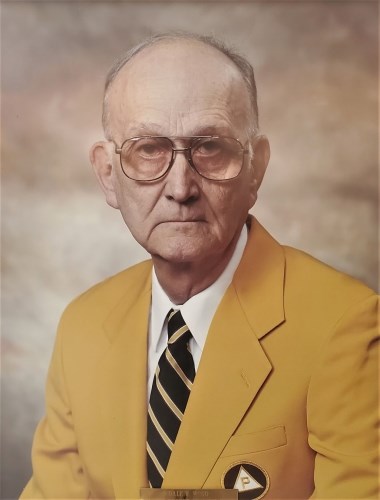 Dale Vernon Wood, 89, of Frankfort, died Sept. 12, 2021 at IU Health Arnett Hospital in Lafayette. He was born on Oct. 26, 1931 in Hillisburg to John Vernon and Jenny Celina (Huffer) Wood. He married Mary Kathryn Atwell on March 28, 1953 in Indianapolis and she survives.

Dale began school in Scircleville, graduated from Michigantown High School in 1949, and attended Canterbury College in Danville. He worked for The Farmer's Bank for 24 years, was a charter bus driver for 20 years, currently worked at Wal Mart for the past nine years, and had umpired Little League from 1953-2019. He also officiated high school baseball, basketball and volleyball from 1972-2009. Dale was a member of Monticello Christian Church.

He participated in roller skating competitions and was a member of the USARSA. His other memberships included the Moose Lodge, where he was past Governor and had earned the "Pilgrim Degree," the Kirklin American Legion, was past Master in the Clinton Masonic Lodge, Clinton O.E.S, and the Shriners. He had been a Boy Scout leader for five years. Dale enjoyed horseshoe pitching.

In addition to his parents, he was preceded in death by a brother, George Wood; two sisters, Gwynne Grant and Marie Rahe; and his niece, Sue Wright.

Funeral services will begin at 2 p.m. at the funeral home. Burial will be in Green Lawn Memorial Park. Memorial donations may be made to Clinton County Humane Society, P.O. Box 455, Frankfort, IN 46041. Please visit goodwinfuneralhome.com, where you may share a message with the family.