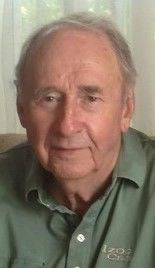 Glen E. Norton, 90, longtime Colfax resident, died Nov. 22, 2021 at Franciscan Health Lafayette East. He was born April 21, 1931, in Rockcastle County, Kentucky to Clell and Jessie (Chasteen) Norton. He married Kay Cox in Mulberry on Sept. 15, 1956, and she survives. They celebrated their 65th wedding anniversary this past fall.

Glen was a 1949 graduate of Bowers High School in Montgomery County. He lived in Colfax for 63 years. He was a veteran of the Korean War serving in the U.S. Navy from 1950-1954. He worked for Shumate Business Forms in Lebanon and retired after working for over 30 years. Glen loved to golf, was very competitive, and has three trophies to show for it. He was committed to his work and was very loving and dedicated to his family. He was baptized in Sugar Creek by Jim Spencer, pastor of the Methodist Church in Darlington.

In addition to his parents, he was preceded in death by two brothers, Keith and Coleman Norton, and two brothers-in-law, David Grimes and Larry Yazel.

Private family services will be held. Burial with military rites will be in Plainview Cemetery, Colfax. In lieu of flowers, memorial donations may be made to the Frankfort American Legion, 451 W. Clinton St., Frankfort, IN 46041, or the Colfax Historical Society, P.O. Box 333, Colfax, IN 46035.

Goodwin Funeral Home, 200 S. Main St., Frankfort, is assisting the family with arrangements. Please visit goodwinfuneralhome.com, where you may share a personal message with the family.

Published by The Times on Nov. 24, 2021.
To plant trees in memory, please visit the Sympathy Store.
MEMORIAL EVENTS
To offer your sympathy during this difficult time, you can now have memorial trees planted in a National Forest in memory of your loved one.
Funeral services provided by:
Goodwin Funeral Home
MEMORIES & CONDOLENCES
Sponsored by Goodwin Funeral Home.
0 Entries
Be the first to post a memory or condolences.