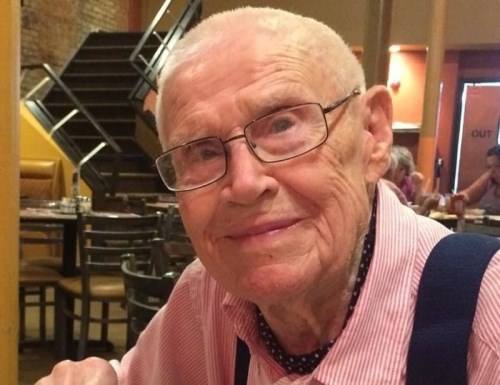 Meredith completed the 12th grade at Jackson Township High School. After WWII service, he used his GI Bill to take college classes in Lafayette. He was a farmer in Clinton County from the early part of his life until 1960. He worked for Aluminum Company of America (ALCOA) from 1955-1983.

He was a local business owner of New's Speedwash Laundromat. He was a member of the American Legion; founding member and elder of Faith Chapel Church of God in Lafayette, Indiana; member of Country Chapel Church of God in Michigantown, where he was a Sunday school teacher and deacon; he served in the U.S. Army Air Corp, "Mighty Eighth" 8th Air Force, 381st Bomb Group. He served his country in the U.S. Army Air Corp (now U.S. Air Force) in World War II in the European Theater as a Waist Gunner on the B-17 Flying Fortress.

He was preceded in death by his parents; sister, Betty Ann Crum; and brother, E. Eugene New.

Visitation was from 1-3 p.m. on Tuesday, Nov. 2, 2021, at Genda Funeral Home in Frankfort. The funeral service was at 3 p.m. at the funeral home. Burial followed in Green Lawn Cemetery with military honors.

Online condolences may be directed to www. gendafuneralhome.com

Published by The Times on Nov. 2, 2021.
To plant trees in memory, please visit the Sympathy Store.
MEMORIAL EVENTS
To offer your sympathy during this difficult time, you can now have memorial trees planted in a National Forest in memory of your loved one.
Funeral services provided by:
Genda Funeral Home - Frankfort
MEMORIES & CONDOLENCES
Sponsored by Genda Funeral Home - Frankfort.
0 Entries
Be the first to post a memory or condolences.