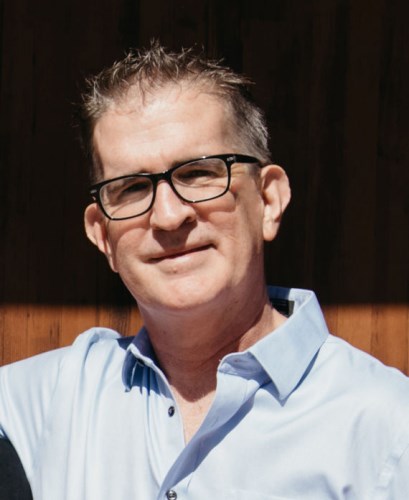 Roger Wayne Colby, 57, died of an apparent heart attack on Wednesday morning, Sept. 8, 2021, at his home in Phoenix, Arizona.

Roger broke the mold simply by being born on Aug. 23, 1964. He was the first son in a family with four daughters born to Vaughn Alden and Eleanor (Larimore) Colby. He graduated from Rossville High School in 1983 where he participated in speech team and drama club, ran cross-country and once led an impromptu parade through the high school library. He received his Bachelor of Arts degree in speech communication from Ball State University in 1987. During college he spent summers as a counselor to kids with learning disorders at the de Paul School in Louisville, Kentucky.

He married his best friend, Bridget Gill, on Oct. 17, 1993, and their life was a grand adventure. They enjoyed traveling together whether exploring local hidden treasures or destinations like Ireland and Iceland. Roger had a successful career in sales at Midwest Telephone (where he met Bridget), Golden Rule Insurance and Renewal by Anderson. For several years, Roger and Bridget were ownership partners of Camelback Custom Doors. His career took him to Indianapolis, Memphis, Charleston (SC), Tampa, Dallas and Phoenix.

Wherever he went, Roger met people and made friends easily. An avid reader, follower of current events, sports and popular culture, he was a quick-witted conversationalist and a great storyteller. He could find humor, joy or irony in nearly every situation. He made time for others by volunteering for Make A Wish Foundation, Habitat for Humanity and St. Vincent de Paul.

Roger is survived by his wife, Bridget Gill Colby; his mother, Eleanor Colby of Lafayette; four sisters, Sue (Jay) Hawley of Kirklin, Rebecca (Dan) Bollinger of West Lafayette, Connie (Harry) Smith of Lafayette and Jennifer (Randy) Jeffries of Brookston; and his best dog-buddy, Bart. "Unkie Rog" is remembered by a multitude of nieces, nephews, great-nieces and great-nephews for his playful pranks, wicked puns and his ability to make each of them feel like they were the only person in the room.

He was preceded in death by his father, Vaughn Alden Colby, one nephew, and a host of aunts and uncles from the Greatest Generation who had a profound impact on his work ethic, sense of duty, faith and service to country.

A celebration of life will be held later this fall. If you choose, memorial gifts may be made in Roger's name to The Wounded Warrior Project woundedwarriorproject.org.

Published by The Times on Sep. 15, 2021.
To plant trees in memory, please visit the Sympathy Store.
MEMORIAL EVENTS
To offer your sympathy during this difficult time, you can now have memorial trees planted in a National Forest in memory of your loved one.
MAKE A DONATION
Please consider a donation as requested by the family.
MEMORIES & CONDOLENCES
0 Entries
Be the first to post a memory or condolences.