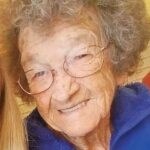 Born in Cherokee Falls, she was the widow of John Edward "Red" Couch and the daughter of the late Thomas White and Ida Trent White. Mrs. Couch retired from textiles. At the time of her death, she was the oldest living member of Temple Baptist Church.

In addition to her husband and parents, she was preceded in death by 2 sisters and 4 brothers.

The family will be at their respective residences.

The Book of Memories is available at www.gordonmortuary.com.

The Blacksburg location of Gordon Mortuary is serving the Couch family.