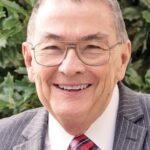 Born in Carbondale, PA, he was the husband of Carol Harris Griffin of the home, and son of the late Walter Joseph Griffin and Maud Boland Griffin. He was also preceded in death by his wife, Penni Oncken Griffin, and a grandson, Nathan Haley.

Dr. Walt Griffin retired in 2017, after 25 years as president of Limestone College in Gaffney. During his quarter century tenure, Limestone's enrollment tripled, thirteen new buildings were added to the campus, faculty qualifications were significantly enhanced, and the number of intercollegiate athletic teams grew from 8 to 25.

Dr. Griffin's academic background is in the field of American history. He completed his Bachelor of Arts degree at Loyola College, Baltimore, and his Master of Arts and Doctor of Philosophy degrees at the University of Cincinnati.

He has also served on the faculties of Xavier University in Cincinnati, Mt. St. Mary's College in Maryland, and been a Taft Teaching Fellow at the University of Cincinnati.

Immediately prior to coming to Limestone, Dr. Griffin was Director of the Cincinnati Center for the College of Undergraduate Studies of The Union Institute. Most of Dr. Griffin's teaching and administrative experience was gained at Upper Iowa University, a small private liberal arts institution. In addition to serving as a professor of American history for 23 years, Dr. Griffin was chairman of the History Department of the Division of Social Sciences and Business Administration, Faculty Chairman, Acting Vice President for Academic Affairs, and Director of Off-Campus Programs.

In the political arena, Dr. Griffin has been a city councilman, a candidate for statewide political office, and the manager of a U. S. Congressional campaign.

He also coached men's and women's college tennis for eight years, and in 1985, he was voted the Iowa Intercollegiate Athletic Conference Men's Tennis Coach of the Year.

He was named a South Carolina Ambassador for Economic Development in 2008, a 2011 member of the Cherokee County Chamber of Commerce Hall of Fame, and a 2013 member of the Limestone College Athletic Hall of Fame. In 2017, Dr. Griffin was honored with the Legends Award by Conference Carolinas.

He was presented the State of South Carolina Order of the Palmetto by Governor Henry McMaster upon his retirement from Limestone in 2017.

Funeral services will be held at 2:00 PM on Friday, October 22, 2021 in the Fullerton Auditorium of Limestone University with Reverend Ron Singleton officiating. Interment will be in Oakland Cemetery and the family will receive friends following the service at the graveside. Social distancing and masks are requested.

In lieu of flowers, memorials may be made to: Walt Griffin Endowed Scholarship Fund, c/o of Limestone University, 1115 College Drive, Gaffney, SC 29340.

An online guest register is available at www.blakelyfuneralhome.com