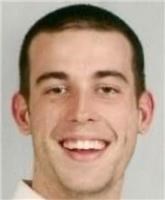 As a member of First Presbyterian Church, Aiken, SC, Frank's strong faith was a guiding light for his life. Frank found strength and solace in helping others through difficult and troubling times. He had a passion for supporting those searching for direction and guidance. Frank was known for his wisdom, great sense of humor, kindness, gentle spirit and eagerness to serve others. His true passion was his family, and he will be remembered as a wonderful son, brother, grandson, nephew and friend to those who knew him.

He was preceded in death by his father William; grandmothers, Virginia T. Jackson, Betty C. Matthews and an uncle, Peter K. Jackson.

A private graveside service will be held in Gastonia, NC. A celebration of life service is being planned in Aiken and will be announced at a later date.

Frank's final act of giving was donating his organs so that others could live. His family and friends treasure the time they had with him and rejoice in the knowledge that his limitless giving spirit surrounds them.

His family would like to acknowledge and thank the doctors, nurses, and staff of LifeLink and Aiken Regional Medical Centers.

In lieu of flowers, memorial contributions may be directed to LifeLink of Georgia, 2743 Perimeter Parkway, Building 200, Suite 230, Augusta, GA 30909, to Pavillon, 241 Pavillon Place, Mill Spring, NC 28756, or to Charleston School of Law, https://www.charlestonschooloflawfoundation.org/contribute/.

To plant trees in memory, please visit our Sympathy Store.
Published by Gaston Gazette on Jan. 6, 2021.
MEMORIAL EVENTS
No memorial events are currently scheduled.
To offer your sympathy during this difficult time, you can now have memorial trees planted in a National Forest in memory of your loved one.
Funeral services provided by:
Shellhouse Funeral Home, Inc. - Aiken
MEMORIES & CONDOLENCES
Sponsored by Shellhouse Funeral Home, Inc. - Aiken.
1 Entry
You taught me how to play spades and listen to Kevin Gates. You were the best of friends that will always be loved and will be sorely missed.