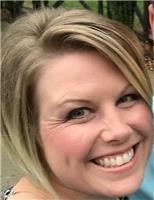 She was born in Mecklenburg County, daughter of John and Suzie Robinson.

She was preceded in death by her grandparents Ben and Phyllis Carpenter, David Robinson and a special aunt Susan Hoard Carpenter. She graduated from East Gaston High School and got her Associates Degree in Paralegal Sciences from Gaston College. She was a lifetime member of Mount Holly First United Methodist Church where she participated in many groups and activities. She worked for the Preschool at First Baptist Charlotte, was a former teacher at First Methodist Preschool in Mount Holly, worked as a paralegal at Ted Greve and Associates, and also for Reagan and Reagan. She also worked for many years at the Stowe YMCA. She loved crafting, going to the beach, watching sports and taking pictures of her daughters and herself.

A Memorial Service to celebrate the life of Stacy will be held 1:30 p.m. Saturday September 29, 2018 at the First United Methodist Church, 140 N. Main St, Mount Holly, followed by a reception of friends and family in the fellowship hall.

Jeffrey S. Painter Funeral Director Licensee of Mount Holly is serving the Hunsucker family. www.jeffreyspainterfdl.com
To plant trees in memory, please visit our Sympathy Store.
Published by Gaston Gazette on Sep. 26, 2018.
MEMORIAL EVENTS
No memorial events are currently scheduled.
To offer your sympathy during this difficult time, you can now have memorial trees planted in a National Forest in memory of your loved one.
Funeral services provided by:
Painter Funeral and Cremation Services
MAKE A DONATION
MEMORIES & CONDOLENCES
Sponsored by SJL.
6 Entries
Our neighborhood isn’t the same, no young mother playing with her children and no sweet smiles greeting you at the fence we miss you very much Stacy. RIP sweet lady
Debbie Howell
Neighbor
September 20, 2020
How sadly devastating. Prayers for those that loved her.
LMC
December 23, 2019
I just read the national news story of the reason of her passing. May the peace of the comforter in Christ rest upon all of Stacy's family and friends.

God Bless.
SJL
December 23, 2019
My heart breaks for Stacy's little daughters losing their Mother so young. I could see Stacy from my kitchen window swinging her girls in the swing or just watching them play. She was a good Mom and a sweet neighbor
Debbie Howell
September 28, 2018
Stacy let her light for Christ shine.
Annette Groves Overcash
September 26, 2018
John and family,So sorry for your loss,May our Lord give you peace.
Deanna Pridmore Peters
September 26, 2018
Showing 1 - 6 of 6 results