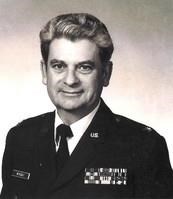 Hubert S. Nethercot, Colonel (USAF) Retired, went to be with his Lord and Savior, Jesus Christ, on November 13, 2021, in Canon City Colorado, surrounded by his loving family. He was 86 years old and leaves behind his wife of 62 years, Elaine, the love of his life.

Hubert was born in Hutchison, Kansas, to William and Katherine Nethercot. He graduated from Maur Hill High School in Atchison, Kansas, and earned his pilot's license just after his senior year. Hugh loved football and baseball, playing shortstop and second base for Kansas State University for three years. He taught his sons and grandsons the nuances of baseball. His son Mark played football at Adams State in Alamosa.

Hugh was a member of St. Francis of Assisi Catholic Church in Colorado Springs where he helped establish the Fraternal Order of Knights of Columbus Council #12228. He was a 4th Degree Knight, lifetime member, and was Grand Knight from 1999-2001. He was very active at St Francis and made homemade ice cream for the sisters of Mount St. Francis.

After he retired from the Air Force, he worked for the PGAV, an architectural firm, as the Vice President of Sales and then at Digital Equipment Corporation as the Facility Manager. He retired and became a Snowbird in the Rio Grande Valley in Texas for 18 winters. He and his wife returned full-time to Colorado Springs until moving to Parker, CO. They moved to Canon City in 2021, which became his final home.

Hugh loved to travel and was a kind, loving man who spent his free time with his family. He went to all his son's ball games and was an avid supporter of his grandkids and their sports. He supported and attended to his daughter's interests as well. He enjoyed playing golf, shooting pool, and going to the casinos where he played the slots. He took his entire family to Maui Hawaii, to celebrate his 50th wedding anniversary. He was very much loved by his family and will be greatly missed.

Services will be held on Monday, November 29, 2021, at St. Francis of Assisi Catholic Church in Colorado Springs, CO, beginning with the Rosary from 9:30 – 9:45 a.m., followed by visitation from 10:00 - 11:00 a.m. Funeral Mass will begin at 11:00 a.m. followed by a reception. Interment will be at Pikes Peak National Cemetery at 1:00 p.m. on Tuesday, November 30, 2021, in Colorado Springs, CO. If you would like to contribute to any of these memorials in Colonel Nethercot's name, please feel free to do so with any Disabled Veterans Association of your choice, Phi Kappa Theta Fraternity - Kansas State, Sisters of St. Francis, K of C – St. Francis, or St. Francis of Assisi Catholic Church. Online condolences at holtfamilyfuneralhomes.com.
Published by The Gazette on Nov. 24, 2021.
To plant trees in memory, please visit the Sympathy Store.
MEMORIAL EVENTS
Nov
29
Rosary
9:30a.m. - 9:45a.m.
St. Francis of Assisi Catholic Church
Colorado Springs, CO
Nov
29
Visitation
10:00a.m. - 11:00a.m.
St. Francis of Assisi Catholic Church
Colorado Springs, CO
Nov
29
Funeral Mass
11:00a.m.
St. Francis of Assisi Catholic Church
Colorado Springs, CO
Nov
30
Interment
1:00p.m.
Pikes Peak National Cemetery
CO
Funeral services provided by:
Holt Family Funeral Home
MAKE A DONATION
MEMORIES & CONDOLENCES
6 Entries
Elaine and Family. What a great man, person and friend. We have many great memories of our friendship over the many years. I remember the era when Hugh worked with Digital Equipment and D20 to achieve the reality of our Alternative High School, Aspen Valley. He was a true supporter of kids and education. Rest In Peace. Jeanette and Buddy
Buddy and Jeanette Van Doren
Friend
December 3, 2021
Dear Elaine and family, Judy and I found the announcement of Hugh's passing in the Gazette too late to arrange attending services. I recall fondly serving with you both on the St Francis Parish Council. Our thoughts go out to you and your family. God Bless you all.
Mason and Judy Smith
December 3, 2021
What a privilege to be related to such a fine man. With our deepest love and sympathy, rest in peace dearest uncle.
Richie and Vana Forster and family
November 27, 2021
The Buckley SFB military Retiree Activities Office (RAO) would like to offer our sincere condolences and our gratitude for Col Nethercot's distinguished service to our country in the Air Force. If you would like help with any matters related to casualty assistance, Defense Finance & Accounting Service, Survivor Benefit Plan (SBP), Veterans Affairs (VA), etc. you can contact our office on Buckley SFB at 720-847-6693. The RAO is staffed by volunteers, all military retirees themselves, and our sole purpose is to provide assistance to any military retirees and surviving spouses/family members with anything related to their military service and/or benefits, in particular during difficult times such as this. We are deeply sorry for your loss. Steve Young Lt Col, USAF, Ret Director, Buckley SFB RAO
Steve Young
November 24, 2021
I will always regret not asking uncle Hubert one more question as I have forever wondered the answer.. His wisdom was priceless you know. And his experiences unending. He taught me a lesson that when I needed to discipline my children, just tell them I am counting to 3 and it better be done! Only I noticed as he demonstrated that technic on his children, it went something like "one.....two.....two and 1/4......two and 1/2.....and so on! I never heard him reach three however and I always wondered what you do then????? Ha Ha. Dang, I didn't get to ask him. Oh, the stories we can all tell. We could do an entire family reunion and not stop telling funnies about our dear, precious uncle Hugh. Maybe this little humorous memory will spark others to contribute their special times and memories along with their love for Hugh also. I will have more to say later after I guit sobbing, but just had to share this with you all as one of my favorites from my times around my big brother (uncle). A finer man I have known not, and his loving spirit will live amongst us all for many years to come. RIP soldier.
Richie Forster
Family
November 24, 2021
Dear Elaine and Nethercot family - I was lucky enough to work on Hugh's team at Digital back around ~1990 both at the plant and the Chapel Hills buildings. This was at an early point in my career, and Hugh's leadership, mentorship, friendship and wise words still resonate. What a wonderful kind man - my deepest condolences to all of you during this difficult time.
Debbie Reid
Work
November 24, 2021
Showing 1 - 6 of 6 results