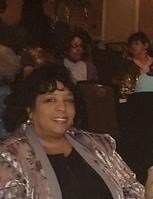 Valerie Annette Harrison was born on October 9th, 1958 into the military family of The Late Rev. Prince Harrison Jr. and Dorothy Louise Myrick. She was born on the Army Post Fort Huachuca, Arizona. Valerie began her early education and travels in Heidelberg, Germany where she started Kindergarten- "A Child's Garden". After living in Karlsruhe, Germany, Valerie then traveled to Fort McPherson in Atlanta, Georgia where she accepted the call of her life by her loving savior Jesus Christ at Mt. Nebo Baptist Church. Fort Benning located in Columbus, Georgia for Elementary Education.

The energetic Valerie then moved to Fort Carson, Colorado where her interests in band, playing the flute, and girl scouts developed. Her middle school attendance was Russell Junior High where she earned Honor Roll.

The vibrant Valerie was blessed to be in the first graduating class of Dougherty High School 1976; where she was active in the National Honor Society, student government and the marching band. Valerie had the honor to be voted by her peers as Dougherty High Schools first ever Homecoming queen in 1975(the year Dougherty High School was built). She was also elected as a Prom Princess in the Spring of 1976. At this time the spirited Valerie attended Friendship Baptist Church in Colorado Springs, Colorado under the pastorship of Rev. E. Ray Johnson, where she participated in their choir.

Valerie's higher education began in Fort Collins, Colorado at Colorado State College where she graduated with a Bachelors Degree in Early Childhood Education. Shortly after, she began a transition into the banking field thus moving to Seattle, Washington. In Seattle she was an active member at Mt. Zion Baptist Church as an usher, inspirational choir member and administrative assistant. Valerie was also an employee at Mt. Zion North West Federal Credit Union, where Mr. Robert Coleman was her mentor under the pastorship of Rev. Dr. Samuel Berry McKinney.

The progressive Valerie then moved to New York living in Manhattan. One of her special moments while on the East Coast was being able to witness the Times Square New Year's Eve ball drop celebration. She had the opportunity to listen to several Christian bands at this celebration. The band that caught her eye was Merci Me and their song "I can only imagine". While in New York, Our nation was faced with the events of 9/11. At the time Valerie was working as the Senior Program Officer for Faith-Based Credit Unions at the National Federation of Community Development Credit Unions (the Federation/Inclusiv). Valerie showed great tenacity and fortitude during this difficult time alongside other New Yorkers. Her eight-hour trek brought her home safely.

The enterprising Valerie excelled all expectations as the Senior Program Officer (450+ credit unions) across the country together for workshops, business partners, technology, in-services, tours and five-star hospitality. She was responsible for coordinating all activities for the credit unions including all training and advocacy programs. She served as a liaison with the faith-based credit unions and their federal regulator. She was also a strong advocate for small credit unions. Valerie coordinated the annual conferences for the Federation for more than a decade. She was well loved and respected by all her colleagues and member credit unions. She will be missed by all colleagues at the Federation/Inclusiv. She had the honor to travel the United States, the Caribbean, Puerto Rico and the U.S Virgin Islands. During her travels for the Credit Union, Danny Glover from "The Color Purple" was one of the many special guest speakers at the California Convention.

Over the span of Valerie's career, she had shown such great value to the credit union that she was proposed to work from Colorado Springs(home) and travel to New York quarterly. She conducted credit union conference calls all over the United States and American territories planning their annual events and conventions. While working the determined Valerie managed to drive to Denver three times a week working on her Master's Degree and ministering to her parents. She earned her Masters degree in Early Childhood Education from the University of Denver, Colorado.

Valerie thoroughly enjoyed life and traveling with close friends to Mt. Rushmore in the Black Hills of South Dakota. While the Olympics were taking place in Atlanta, Georgia Valerie had the opportunity to visit with family while simultaneously conducting the Federation of Credit Unions convention. Valerie's adventurous journeys didn't stop there. She got to travel to Washington, DC touring the White House, the Capital and the Smithsonian's Museums.

Valerie was an avid reader, she loved learning, thinking outside of the box, history along with the unique and different. She was one of a kind, witty, gracious, inquisitive woman with a keen sense of humor. The intuitive Valerie had an amazing analytical brain in which she inherited from her father. She was a woman of wisdom and discernment with an overflowing heart of compassion making everyone who met her feel special and valued, traits in which she inherited from her mother.

While commuting between New York and Colorado she attended Bible Study Fellowship in both states. During the time she was living in New York Valerie attended Abyssinian Baptist Church (Rev. Dr. Calvin O. Butts III, Pastor). She was also a member of Emmanuel Baptist Church (Rev. Cleveland A. Thompson, Pastor) in Colorado Springs, Colorado. She enjoyed their exceptional choir of worship and praise.

Valerie's hobbies include crafts, technology, crocheting and sudoku. She spent her free time researching the innocence project, attending music and dance recitals, live theater and the fine arts and attending lectures at the universities.

Valerie is survived by a host of first cousins, church members, Eastern Stars and many other family members and friends. She leaves behind Gods People whom share tenderness and kindness in her life's journey.