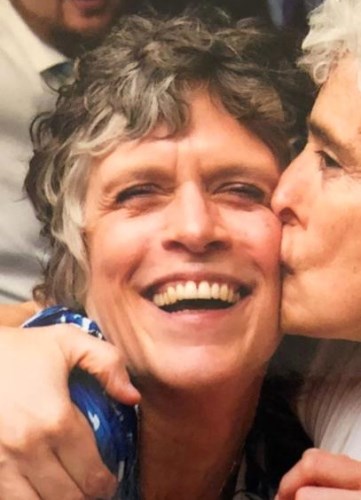 BORN
1954
DIED
2019
Deirdre Scott died as she lived, on her own terms, November 18, 2019 at home, at peace and held closely by friends too many to count. She began life in New Jersey on September 30, 1954. But she called the Pioneer Valley her home for the last 45 years, wrapping her gifts in many corners of Western Massachusetts. She graduated from UMass Amherst with both bachelor's and master's degrees. An educator at Chicopee High School, not long retired, she was a teacher beyond the conventional confines of the classroom. Everyone she turned her attention to knew they had something to learn from Deirdre. Be it on an epic hike or bike ride, delighting in one of her masterful meals, being dragged to a class you thought you cared little about, or a concert outside of your usual tastes, she was a fount of ideas she consistently put into action. Deirdre wanted to learn saxophone and play in bands, be a docent at the greenhouse at Smith College, paint, garden, learn about birds, local history, start a dog walking business, join a board for a non-profit, give service to a local aid organization. She did every one of these things and so much more. Hampshire Life was one of her many guidebooks. What Deirdre accomplished in a day was dizzying. Deirdre dared to and dares you to: think something, do it!

Her family of origin, specifically her mother Peg, got Deirdre's endless and loyal care until her death in April 2018. Her cousins Deb and Dennis, Becky and Ray, their children and grandchildren will miss Deirdre immensely. Stepsons Joel and Aaron were inspired by her generosity, creativity, athleticism. In-laws Gloria, Joanne, Amy, Steven, Sarah and Annalee (and their partners and spouses) were proud to call her family. Deirdre was a sister to her family of choice, a world of friends who now walk through these days carrying Deirdre's memory with them, all lives much richer for having been touched by her, much heavier carrying the burden of knowing they will have only memories to rely on of receiving one of her homemade cards, hearing her voice sing its song of unwavering friendship, being pulled along on an adventure that she dreamed up and knew would be a perfect fit for them. This amazing and vast group of friends would require a full column in these pages to enumerate. Without you Deirdre could not have flourished. You know who you are.

Her wife, Diane, who first fell in love when Deirdre fixed her blue eyes and wide grin on her 17 years ago, was overcome with being chosen to be the recipient of - and witness to - Deirdre's gifts, both tangible and intangible. It was her honor to be Deirdre's partner in all things, and support in the last year whenever, however Deirdre needed and wanted, as hope for recovery from cancer and its aftermath dwindled, requiring a lesson in forbearance and eventual submission she could only teach herself, one that we could only observe through her grace and beauty from afar.

Deirdre was the best kind of friend. She asked questions and really wanted to hear the answer, not simply wait for her turn to talk. Deirdre lived a life with few regrets. One was that she could not thank everyone who helped love and support her, and especially over this past year. Deirdre intended to throw a party in gratitude for the many kindnesses bestowed upon her. As she came to realize that she could not fulfill this herself, she asked that the party still be held as a Celebration of Life. Please join us at 2 pm on January 5, 2020, at the Blue Heron Restaurant in Sunderland, MA.

There is not enough gratitude we can express toward Deirdre's caretakers and advocates at Valley Medical Group, Cooley Dickinson hospital, brilliant medical professionals at Mass General, and the kind and loving staff of the Cooley Dickinson VNA and Hospice.

In lieu of flowers, consider this: dream up an adventure and do it in honor of her magnificent spirit. Donations in her memory can also be made to Caring for a Cure, the Survival Center, or the Cooley Dickinson VNA and Hospice.
Published by Daily Hampshire Gazette on Nov. 22, 2019.
To plant trees in memory, please visit the Sympathy Store.
MEMORIAL EVENTS
Jan
5
Celebration of Life
2:00p.m.
Blue Heron Restaurant
Sunderland, MA
MAKE A DONATION
MEMORIES & CONDOLENCES
15 Entries
I was Deirdre's friend in high school in Ellenville, NY. I didn't know that she died. It was a shock when I saw her obituary. She looked exactly the same as I remember her. She was a true friend. We just lost contact, as we were so young when we were friends.bPlease know that I think of her and remember her as a kind, genuine soul.
Love, Eileen (Rugg) Pew
EILEEN PEW
Friend
December 31, 2019
With her Cher wig and labcoat, her exceptional principles, love for kids and interest in the work of starting a school, Deirdre injected her DNA into Four Rivers, where she spent two years helping build the school from scratch. She was the absolute best of colleagues and also a friend. I dearly miss our twice-yearly breakfasts when we caught up, talked shop and family and retirement ideas. I love how thoroughly she was and is a force for good: being good, doing good, imagining good, inspiring good. We'll love her forever!
Susan Durkee
November 24, 2019
I met Deirdre many years ago in Leeds Mass. she invited my partner and I for dinner in Leeds. She delighted us with Chilean Sea Bass. My partner and I will never forget that delicious meal. Her ability to listen to others is divine. I would see her in Provincetown during the summer with Dianne. She was on her bike smiling
Julie Fisher
November 24, 2019
A bright light has gone out of the world. I have never met someone who combined such a zest for life with such rigorous expectations of herself. She wanted to, so she WOULD learn to play the saxophone! She wanted to, so she WOULD climb and ride and push herself to her limits. She wanted to make a difference in the lives of her students, so she WOULD be endlessly creative in helping them to care about her subject. I will always cherish the many wonderful memories of our time together.
Nancy Billias
November 24, 2019
Only one, intense, bright smiling shooting star trailing laughter behind her will she be for me. One star. Every night.
Maryann Jennings
November 24, 2019
RIP Deirdre...........
All of our classmates will remember you.
Susan Ryan
Susan Ryan
November 24, 2019
To Deirdre's wife, family & friends,
I went to school with and graduated with Deirdre in Ellenville, NY at Ellenville Central school. She always had a beautiful smile to go along with her beautiful face. RIP Deirdre.....
Susan Ryan
November 24, 2019
I met Deirdre at my first year at Chicopee High Scool. I was her supervisor and enjoyed viewing her classroom. She was an amazing educator and did over and above in teaching to her students. She loved teaching and it showed. Privileged to be a colleague and friend. She will be greatly missed. My condolescences, Bobbi
Bobbi Coletta
November 24, 2019
Deirdre added such enthusiasm to her teaching stint at Fairview Memorial. Her huge smile and thoughtful conversations with me made my day. She contributed more in a day than many do in a year. She was quite a spirit!
Simone Perrier
November 24, 2019
What an amazing lady with such a bright smile and brighter spirit. Thank you, Deirdre for your advice, questions, stories and saxophone chats. What a great example you have been. ❤
Jim Hoover
November 23, 2019
She always had a beautiful smile on her face no matter what! Her positivity and patience will always stick with me. Ill never forget her.
Mariah F.
Student
November 23, 2019
Ms. Scott was my husband and I's freshman science teacher. She was also my advisory teacher. She always had a kind spirit and smile anytime you walked in the door. She always checked in to see how things were going. It was definitely a nice thing to rely on during some of the rough days of high school. She will be missed by the many people who knew and adored her.
Heather Smola
November 23, 2019
One of the genuine and kindest individuals I have ever had the pleasure of meeting. I consider myself lucky being able to call her my teaching mentor and friend ❤
Carly Briggs
Coworker
November 23, 2019
I met her many years ago.Such an outstanding woman. She rejoiced in life and she was a great lover of adventure. Meeting her was a gift to me. I am sorry to here oh her passing. I will never forget her even though I have not seen her in a long time.
Lauren Corbett
November 23, 2019
I never heard Deirdre utter an unkind word. She will be remembered with great fondness. Loved her cowgirl boots when she played sax.
ANGELA FLYNN
Acquaintance
November 22, 2019
Showing 1 - 15 of 15 results