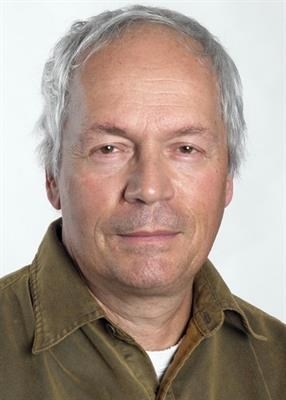 FUNERAL HOME
Colonial Forastiere Funeral Home
985 Main Street
Agawam, MA
Fred Contrada, a long-time reporter and columnist for The Republican of Springfield, passed away peacefully on Nov. 6th, surrounded by his family. He was 66 years old.

A modern-day Renaissance man and avid storyteller, Fred climbed mountains, wrote novels, played blues guitar, traveled widely, camped in the back country, and earned a black belt in karate. He passed on his spirit of adventure and love of travel to his children Amanda and Rio.

Born in Chelsea, MA, on April 30, 1952 to Therese and Fiore Contrada, Fred grew up in an Italian family in East Boston along with his brothers Anthony and Joseph. Fred was a standout student who got a scholarship to Boston College High School. He graduated from the College of Holy Cross in Worcester with a degree in English. At Holy Cross, he developed a lifelong interest in Eastern religions, served as editor of the literary journal, and interviewed avant-garde artist Salvador Dali.

After college, Fred decided to pursue a life of adventure rather than settle on a career track. He drove cross-country in his Volkswagon van, stopping in New Orleans, where he waited on tables at the Cafe DuMonde and made lifelong friends. He also worked on a sulfur boat on the Mississippi River, picked apples on an orchard in Oregon, made pizza in Atlanta, moved furniture in San Francisco, and processed salmon eggs in Alaska, all while writing autobiographical novels and freelancing for various newspapers.

On a trip home for Christmas, Fred met his wife-to-be Joan, a fellow journalist. On June 14, 1986, they got married. The following year, the couple moved to Northampton where they raised a family. Fred loved taking his children on hikes and teaching them how to pitch a tent, make a fire, drive a car, and navigate life with strength, courage, and good humor.

As a longtime newspaper reporter, Fred earned a reputation for fairness. Fred's deep sense of compassion shone through in his stories. Most of all, he enjoyed writing his weekly column, which developed a loyal following. He wrote about his outdoor adventures, travels, family, and local characters. In 2017 Leveler's Press published The Columns of Fred Contrada.

A man of indefatigable energy, Fred rose early in the morning to work on his fiction before going to the office. His many works of fiction include Trager Stories, Dorchester Ave., New Orleans Stories, and The Trail.

The last two years of his life, Fred battled a degenerative neurological condition with remarkable strength and courage. He is survived by his beloved wife Joan, children Amanda and Rio, and younger brother Joseph.

In lieu of flowers, contributions in Fred's name can be made to DopaFit Parkinson's Movement Center, 15 College Highway Unit C. Southampton, MA 01073.

Please join us for a New Orleans-style parade and celebration of Fred's life on Sunday, Nov. 11, 2018 at 12:30 p.m. when the Expandable Brass Band will lead a parade from Forbes Library to the Ballroom at the Hotel Northampton for a celebration from 1-4 p.m.
Published by Daily Hampshire Gazette on Nov. 8, 2018.
To plant trees in memory, please visit the Sympathy Store.
MEMORIAL EVENTS
To offer your sympathy during this difficult time, you can now have memorial trees planted in a National Forest in memory of your loved one.
Funeral services provided by:
Colonial Forastiere Funeral Home
MAKE A DONATION
MEMORIES & CONDOLENCES
3 Entries
Offering our sincere condolences. May the God of love comfort your heart and make you firm in your time of grief. 2 Thessalonians 2:16,17.
November 19, 2018
My condolences to the Contrada family.
Sorry to hear of Fred's passing.
He was an excellent reporter, gifted writer, story teller, and humble man.
I respected his outstanding work and was honored to call him friend.
Rest in peace my friend.
Ray Hershel
Friend
November 11, 2018
Our deepest condolences to Freds family and friends. His was a life well-lived and he was an inspiration.
Mary Midura
Acquaintance
November 10, 2018
Showing 1 - 3 of 3 results