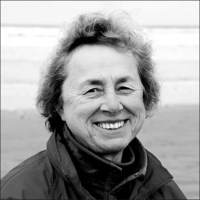 South Weymouth, MA — Janet Munroe Pynchon, aged 89, passed away April 4, 2021. Daughter of the late George B. and Mary H. R. Munroe, she grew up in Braintree and graduated from Braintree High School, then went on to graduate Cum Laude from Miami University of Ohio with a near straight A average. After a year studying in France on a Fulbright Scholarship, she returned to Ohio to complete her masters. She married David M. Pynchon in 1960, raised four daughters together and supported him as he served as headmaster at St. Louis Country Day School, Deerfield Academy, and Allendale-Columbia School in Rochester NY before his death in 1988. She was a licensed real estate broker, selling with D.H. Jones in Amherst, and ran her own vacation rentals well before VRBO was around. Once retired, she competed (and won regularly) in various women's golf tournaments in Amherst and on Cape Cod.

She is survived by daughters M. Hunter, Janet (Ned Jeffries), Sarah (William Shadbolt), and Elizabeth (John Bailey), grandchildren Will, Jack, and Hunter, her brothers, William (Bill) Munroe (Jane Marshall), John Bingham (Bing), sister-in-law Henrietta (widow of brother George), and nieces and nephews. Memorial Service on August 21st, 11am, at the Pynchon/Munroe family plot in the Village Hill Cemetery, Williamsburg, MA. Reception to follow at Look Memorial Park.
Published by Daily Hampshire Gazette on Aug. 18, 2021.
To plant trees in memory, please visit the Sympathy Store.
MEMORIAL EVENTS
Aug
21
Memorial service
11:00a.m.
Village Hill Cemetery
Williamsburg, MA
MAKE A DONATION
MEMORIES & CONDOLENCES
1 Entry
What a strong woman she was! As the spouse of the Headmaster at Deerfield Academy, she proved her mettle, patience, and strength. Her husband hired me (I was only one of seven women employed at DA at that time), so Janet was a role model for me. The last time that I spoke with her was during the dedication of David's portrait on campus. I was delighted that she was there. My sympathy to the entire family.
Claudia Lyons
August 18, 2021
Showing 1 - 1 of 1 results