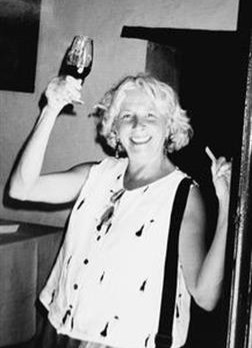 BORN
1946
DIED
2020
FUNERAL HOME
Czelusniak Funeral Home
173 North Street
Northampton, MA
Kathy Hibshman of Florence left her home, garden, and friends on September 19th, 2020. She died at home after a long illness. She was not ready to go but lived on her own terms right to the end.

Born November 14, 1946, to Henry and Marjorie Litchfield, Kathy grew up in Springfield, Illinois. Kathy was drawn to art even at an early age and instructed by her mother in painting and clay work. She continued to create art for many decades and was largely self-taught in her creative loves which included gardening, watercolor painting, and pottery. She was a National Honor Society student in public school but more importantly Kathy formed lifelong friendships during her early years that included Marjorie Moon Manthei and Mary Gartung with whom she gathered regularly.

Kathy studied art at Northwestern University in Chicago for two years and then transferred to Washington University in St. Louis where she was elected a "Beauty on Campus' and met her future husband, Andy Hibshman. They joined the AmeriCorps VISTA program and Kathy did her first craft show in Decatur, IL in 1969. In 1970 they packed up their Volkswagen microbus and moved to Williamstown, Vermont. Kathy started a pottery studio in her garage and called it Kaleidoscope Pottery because "it was always changing and no two pieces ever had the same design." She sold her work at local craft venues including historic Frog Hollow.

In 1983 Kathy left her life in Vermont behind and moved to Florence, MA with Barry Schechter whom she described as the love of her life. Kaleidoscope Pottery took up residence at One Cottage Street in Easthampton and was quite successful. It was here that Kathy and Barry first met other lifelong friends including Denise Herzog and Michael MacTavish, Robin and Nancye Hodgkinson, and Margot Menkel and Tony Clarke. Kathy, Denise, and Michael took many trips together, studying art, and painting in some of the most beautiful places on earth. Barry and Kathy retired at the end of 1993 but the business continues today under the direction of Evelyn Snyder who became close friends with Kathy and considers her a mentor. Many of the leaves used in Kaleidoscope Pottery's designs came from Kathy's garden and many mornings Kathy and Evelyn shared coffee, conversation, and leaf picking.

In retirement Kathy was finally able to more fully pursue her other loves of travel, gardening, and watercolor painting. To step into Kathy's garden was to enter another world. Kathy described herself as "pin tidy and Germanic" yet her gardens attained a restrained wildness that allowed the natural beauty to shine. Her gardens were part of the Friends of Forbes Library local garden tours. Kathy received help with her garden in recent years from Cindy Bow who became a close friend and worked extremely hard to maintain Kathy's tough gardening standards.

In her watercolors Kathy explored vibrant colors and subject matters ranging from landscapes and botanicals to whimsical and sometimes surreal dreamscapes. Most of her paintings were connected to the natural beauty of the world. She had several one-woman shows over the years including at The Northampton Center for the Arts and at Nashawannuck Gallery in Easthampton.

Those who knew Kathy well knew her penchant for fun and crazy times such as interacting with her imaginary pets. She inspired adult friends to be silly and indulge in imaginative play and a variety of games and events. Inspired by friends Kathy Washburn and Tim O'Donnell, Kathy hosted cribbage nights with a close circle of dear friends. Kathy was also an accomplished chef and baker and frequently treated her friends and people who worked for her to baked goods and delightful meals. After retiring she and Barry hosted friends at their winter house in Tucson as well as a rental house on the beach in Eastham, MA which remained one of Kathy's favorite places on earth. In their years together she and Barry influenced and supported many other artists and entrepreneurs. Their marriage ended but she continued to support her friends in many ways and they returned the favor in helping her manage as her health declined. She approached her declining health with a stoicism that allowed her to remain independent in her house until the very end. Two friends who were especially instrumental in helping Kathy were Lucy Pickett and Nancy Stevens who checked in with her daily. While Kathy had not planned to spend the last decade of her life on her own she came to embrace her solitude and accepted that it brought her many lessons she never expected to learn. She was one of many people devastated in 2018 by the unexpected loss of Denise Herzog, who was a dear friend, helper, and soulmate to Kathy.

Kathy is survived by her brother Henry Litchfield of Peoria, IL her niece Jennifer Graves of Rockport, IL, her ex-husbands Andy Hibshman and Barry Schechter, by the many friends mentioned here and many more too numerous to mention. One of Kathy's final wishes was to host a party for her friends to celebrate her life. It will be planned at a time when it is safer to travel and be together. For online condolences, please visit Czelusniakfuneralhome.com.
Published by Daily Hampshire Gazette on Jan. 25, 2021.
To plant trees in memory, please visit the Sympathy Store.
MEMORIAL EVENTS
To offer your sympathy during this difficult time, you can now have memorial trees planted in a National Forest in memory of your loved one.
Funeral services provided by:
Czelusniak Funeral Home
MAKE A DONATION
MEMORIES & CONDOLENCES
1 Entry
I still can't believe it Kathy! I miss you, love Cindy
cindy bow
Friend
January 30, 2021
Showing 1 - 1 of 1 results