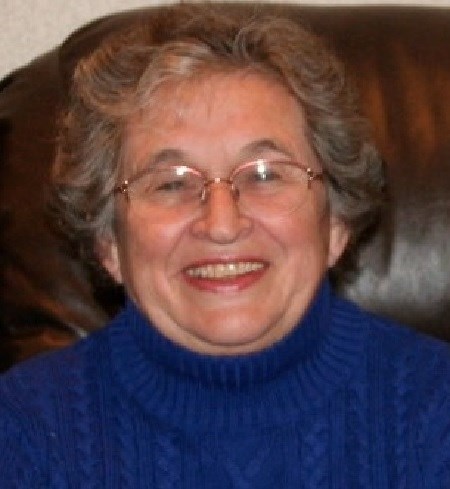 Connie Aimone passed away peacefully at her daughter's family home in Albany, Oregon, on November 10, 2020, from cancer. Connie was born on December 28, 1935, to Marjorie and Maynard Weik in Park Falls, Wisconsin. Connie was the second oldest in her large family. She had three sisters (Marilyn Jean Engel, Cheryl Marjorie Koshak, and Kay Ann Kundinger) and four brothers (Bobby Lee Weik, Denny Carl Weik, Larry Owen Weik and Billy Douglas Weik), all of whom reside in Wisconsin. She graduated from Park Falls High School in 1954 where she met her husband Raymond Aimone. They were married on January 7, 1956, for 33 great years until Ray passed due to cancer in 1989.

For Connie and Raymond's honeymoon, they traveled to the Pacific Coast and decided to make their home in Coos Bay, OR. In Coos Bay, Connie worked for The House of Myrtlewood as an office manager for over 40 years. She and her husband raised six children where Connie stayed very busy and enjoyed attending all her children's school programs and sport activities. She also loved gardening, remodeling and playing cards with family.

After Connie retired, she decided to move back to Park Falls, Wisconsin, to spend more time with her mother and siblings. During this time she was reintroduced to a former classmate, Don Pohle. Don had also lost his wife around the same time. They built a new chapter of life together in Phillips, Wisconsin. Don and his family quickly became part of her family. He had three daughters and two son-in-laws; Dina and Dan, Renee and Norm, and Becky.

After Don Pohle passed away in April 2020, Connie decided to move back to Oregon. She had missed Oregon and wanted to spend time with her children, many grandchildren and great grandchildren. She moved to Albany, Oregon and was living with her daughter and son-in-law Robin and Gene D'Agostini. Family was everything to Connie, and even though her life was cut short she was able to spend quality time with the ones she loved.

Connie is survived by her six children and their families. Starting with the oldest is Robert John Aimone and Irene of Madras, Oregon, Robin "Candee" Aimone D'Agostini and Gene D'Agostini of Albany, Oregon, Michael Aimone of Portland, Oregon, David Wayne Aimone and Kelly of Washougal, Washington, Lisa Marie Aimone Barnard and Brian Barnard of Florence, Oregon, and the baby of the family Kim Ann Aimone Lucero of North Bend, Oregon. She has many grandchildren and great grandchildren. In Coos Bay, Oregon, she has two brothers-in-law and their families; Jim Peterson (Sarah) and Bob Peterson (Dorothy). We also want to include all of her siblings and Don's family back in Wisconsin.

She was preceded in death by her husband, Raymond, her second love, Don, both her parents, a sister Marilyn, a brother Bobby, and her granddaughter Amanda D'Agostini.

We are grateful for her life and mourn her passing but find comfort in knowing she will be reuniting with her loved ones that have passed. Connie will be buried with her husband Raymond Aimone at Ocean View Memory Gardens in Coos Bay, Oregon. A family celebration will be held at the cemetery in the summer of 2021. Online condolences may be posted at www.fisherfuneralhome.com.

To plant trees in memory, please visit our Sympathy Store.
Published by Corvallis Gazette-Times on Nov. 17, 2020.
MEMORIAL EVENTS
No memorial events are currently scheduled.
To offer your sympathy during this difficult time, you can now have memorial trees planted in a National Forest in memory of your loved one.
Funeral services provided by:
Fisher Funeral Home Inc
GUEST BOOK
0 Entries
Be the first to post a memory or condolences.