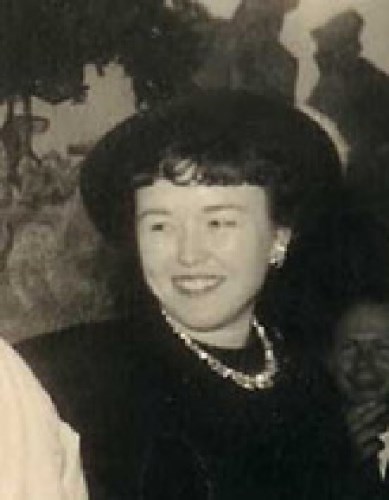 Dorothy "Dottie" May (Conley) Newman passed away at her home at 7:05am as the sunlight first came through her window, with family members in attendance. She is survived by her husband James Clair Newman, children J. Ben (Kathy) Newman, Lynda (Don) LePoidevin, Scott (Cindy) Newman, Mary (Alan) Mead and her grandchildren and great-grandchildren.

Dottie was born in Klamath Falls, Oregon. Her mother passed away when she was 5 years old and Dottie lived with her father in logging camps and with various relatives and friends over the next several years.

At age 10, Doris and Lou Yost became her guardians and provided a more permanent home. She spent her early life tending chickens and a vegetable garden. She shot crows and squirrels that were eating the vegetables with her .22 for a penny apiece and was proud of her marksmanship.

After High School, she became an X-Ray tech and worked in Pendleton and Eugene, where she enjoyed assisting a doctor who was an early pioneer in joint replacement. While in Eugene, she met the love of her life, Jim Newman, a young Army Medic working in the recruiting office, and they were married on August 5th 1951.

She and the GI bill put her husband through undergraduate and University of Oregon Medical School. Shortly after his graduation, the Army sent the now family of 5 to Mannheim-Kaefertal military base where Jim ran the base dispensary, and she spent her time raising her children (4 by the end of the tour) and volunteering with the Cub Scouts.

The family returned to Oregon just before the Columbus Day hurricane put a tree through the window of their new home, and Jim started his residency in Psychiatry at Oregon State Hospital.

After his residency was completed in 1966, the family moved to their current home, an 1893 farmhouse in south Corvallis. Jim started his private practice and Dottie relished her roles as wife, mother, farmer, master gardener, 4-H leader, Campfire leader, Dog Control Board member, Benton Co. Water Board member (pollution & land use planning), member of the Women's Auxiliary to Benton County Medical Association, running a large sheep ranching operation (300+ head), and quilting with a group of local women to donate quilts to charity.

In 1985 Jim & Dottie moved to Colorado Springs after Jim accepted a promotion to full colonel and the job of Chief of Psychiatry at the Evans Army Hospital at Fort Carson. While there, Dottie taught quilting, started a quilting group that made quilts for all the newborns at the base (a program that was copied at several other military bases), acted as "Mrs. Santa Clause" to the children, and eventually became the full time (unpaid) Volunteer Coordinator for the entire military base at Fort Carson.

In 2007 after Jim retired and Dottie's health began to be affected by the altitude in Colorado Springs, the couple returned to life in Oregon at their 1893 farmhouse in south Corvallis (which they had kept while in Colorado) where Dottie continued quilting and gardening. She was especially fond of her dahlias.

Anyone wanting to make donations, please contribute to your favorite charity in Dottie's name. You can access a slide presentation about Dottie's life at www.mchenryfuneralhome.com

To plant trees in memory, please visit our Sympathy Store.
Published by Corvallis Gazette-Times on Nov. 20, 2020.
MEMORIAL EVENTS
No memorial events are currently scheduled.
To offer your sympathy during this difficult time, you can now have memorial trees planted in a National Forest in memory of your loved one.
Funeral services provided by:
McHenry Funeral Home & Cremation Services - Corvallis
GUEST BOOK
1 Entry
I had the pleasure of knowing Dorothy from her visits to Quiltwork Patches in Corvallis...as I remember she would come to Corvallis periodically from Colorado and would always come by the store when we were on 2nd street and after we moved to 3rd street. I remember her as one of grace and generosity. My prayers to her family.
Geary Cuniff
November 20, 2020