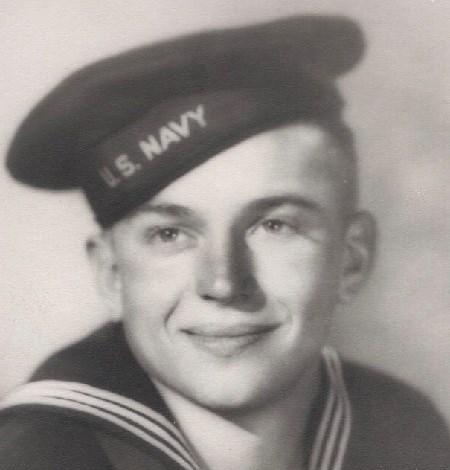 Dr. James Vomocil, PhD., one of the greatest of The Greatest Generation, passed away of natural causes on September 17, 2020, five days after his 94th birthday. Jim was born on September 12, 1926 in Jacumba, California to Ladislav and Mary Vomocil. He grew up on a farm south of Gadsden, Arizona, twenty miles southwest of Yuma.

Upon graduation from Yuma High School in 1944, Jim enlisted in the Navy as a 17-year-old. While stationed in Chicago, he met Agnes Ann Cotter when both were riding on the L commuter train, just like in the lyrics of the 1944 Judy Garland hit song, Clang Clang Clang Went the Trolley. Jim married his little darling and sweetheart on Thanksgiving, November 28, 1946. They were married for 67 years until her death in 2014.

Jim and Agnes Ann raised three sons, Marc, Barry, and Kirk, first in Davis, California and then on a farm south of Philomath where they raised sheep and Christmas trees.

Jim graduated from the University of Arizona (BS, 1950), Michigan State University (MS, 1952), and Rutgers University (PhD, 1956). Jim was a soil scientist, first at the University of California, Davis (1956-1966) and then at Oregon State University (1967-1992) where he was the Soils Extension Specialist helping farmers statewide deal with soil health and water issues. Jim had an amazing scientific mind and was very math oriented. During his 36-year career, he authored or co-authored over 100 scientific papers. Jim received many awards and honors recognizing his professional contributions including having an annual water conference at OSU named after him, the James A Vomocil Water Conference. He was also honored as a member of the Diamond Pioneer Agricultural Career Achievement Registry by Oregon State University. Jim worked on international assignments in Brazil, Yemen and China.

Jim was very community service-oriented serving as a Little League coach, school board member, Lions Club volunteer, the T-shirt Man for the Red, White, and Blue Music Festival, and a bluebird box installer and monitor. In 2001, Jim was a member of the first TOUCH delegation to visit Ukrainian orphans where he lent his expertise to help design a septic system for an orphanage. In 2015, Jim had the privilege of going on an Honor Flight to visit the World War 2 and other memorials in Washington D.C., where he was lucky to meet fellow World War 2 veteran Senator Bob Dole.

Jim was very concerned about global warming and strongly advocated planting trees as part of a solution. He was a proponent of planting a trillion trees. Plant a tree in Jim's memory. He was a disciple of the book Drawdown, The Most Comprehensive Plan Ever Proposed to Reverse Global Warming.

After retirement, Jim took up the hobby of telling jokes and stories, often memorizing jokes from books. Jim always had a smile and a joke to share, sometimes corny and always entertaining. Jim told jokes to his family the day before he died.

Jim was preceded in death by wife, Agnes Ann, and son, Kirk. He is survived by sons Marc (Sally) and Barry, grandchildren Peter, Sara, Elisa, Bradley and Kari, and seven great grandchildren.

Donations in Jim's memory may be made to the South Willamette Valley Honor Flight, the TOUCH project, a program of the Corvallis Sister City Association, or Heartland Humane Society.

No public service is planned at this time. A memorial video may be viewed at www.mchenryfuneralhome.com.

To plant trees in memory, please visit our Sympathy Store.
Published by Corvallis Gazette-Times on Oct. 20, 2020.
MEMORIAL EVENTS
No memorial events are currently scheduled.
To offer your sympathy during this difficult time, you can now have memorial trees planted in a National Forest in memory of your loved one.
Funeral services provided by:
McHenry Funeral Home & Cremation Services - Corvallis
GUEST BOOK
1 Entry
To: Marc and Sally and other members of the Vomocil family: Charles and I offer our deep sympathy forthe loss of James Vomocil. We wish you have comfort in these sad days. Peace and love, Carlota and Charles Lindsay
Carlota and Charles Lindsay
October 21, 2020