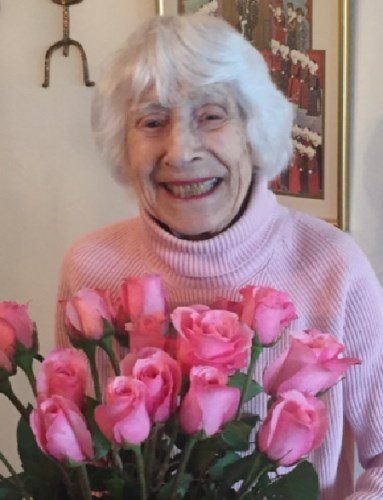 Margery Senders passed away at her home, Tuesday, October 27, 2020, in the presence of her children and caregivers, just two weeks shy of her 101st birthday.

A true lady of the greatest generation, her wit, charm, and laugh continued right up until her passing. Her life was not only measured in years, but also her positive attitude toward others. "Marge" as she preferred to be called was born in Portland to Berenice (Moyses) of Chicago and Henry Feldman of Portland, the second of three daughters. She attended Ainsworth and Chapman Grade Schools, Lincoln High School, and Reed College. While attending Reed she met Bruce Senders of Albany, Oregon, while skiing at Timberline Lodge. They married December 14, 1941, just one week after the bombing of Pearl Harbor to start WWII. They then moved to Seattle to open a branch office of the family business (Mt. Hood Soap Company). Both of her sons were born in Seattle; Steven in January 1944 and Jeff in March 1945. In 1955 the family returned to the Portland area to be near family.

When the boys got older Marge and Bruce traveled the globe many times over, but their favorite destination was Portofino Italy. They also wintered in Carmel, Palm Desert, and Maui. In the summers they enjoyed spending time on their cabin cruiser and had many fond memories of cruising the San Juan Islands and visiting Victoria B.C.; sometimes with their son Jeff. After her husband's accidental death, she continued to travel with her younger sister. On one such trip to Cambodia and Vietnam, the tour guide referred to the two white-haired old ladies as "the mountain goats."

Marge volunteered in surgery recovery at St. Vincent Hospital, the Assistance League, the Portland Youth Philharmonic, and the gift shops of the Portland Art Museum and William Temple House Thrift Shop. She was a lifetime member of Multnomah Athletic Club and made many friends there. Marge was a swimmer and tennis player in her youth, and a track walker (several thousand miles) in her later years. She believed physical fitness and a good diet would extend her life (her evening Scotch maybe not so much). When she had rotator cuff surgery (twice) she made sure the fabric of her sling matched her purse. Marge enjoyed watching Jeopardy and Wheel of Fortune; and did so right up until a few days before her passing. Had she been a contestant she probably would have won.

Marge was preceded in death by her parents, both sisters, husband Bruce in 2002, the Seattle "gang, and most of her lifelong friends. She is survived by sons Steven (Laurie) of Portland, Jeff of Albany, grandson McKinley of Beaverton, nieces Carol (David) Baker, Helen (Paul) Curtis, and nephew Stuart (Barbara) Lang (formerly of Albany), all of Portland.

A private Covid limited graveside service was held at Beth Israel Cemetery in Portland, where she was entombed alongside her husband of 61 years on November 2, 2020. The family wishes to express its gratitude to the caregivers of Select Home Care and Legacy Hospice for their professional and compassionate assistance in Marge's final months.

To plant trees in memory, please visit our Sympathy Store.
Published by Corvallis Gazette-Times on Nov. 15, 2020.
MEMORIAL EVENTS
No memorial events are currently scheduled.
To offer your sympathy during this difficult time, you can now have memorial trees planted in a National Forest in memory of your loved one.
GUEST BOOK
5 Entries
Lively and quick, just like the words from the poem, she was lively and quick and always smiling. Whenever we would meet she was always smiling, a pleasure to be with. She will be missed. My heart is with your family. Sincere Wishes.
Kathleen Smith
Coworker
November 17, 2020
What an amazing woman Marge was. We were blest to have her as a member of Assistance League of Greater Portland (ALGP) for several years. If you do have a Celebration of Life for Marge we'd love to be a part of that. (Perhaps even have a sip or two of Scotch in memory of a lovely lady!) Polly Livingston, President ALGP
Polly Livingston
Friend
November 15, 2020
For all the owners of Kings Square Condominiums. we will truly miss Marge's spirit, humor, energy and participation in our community. She was a force not to be denied, a great help in bringing us all together.
Rudiger (Carl)Goebel
Neighbor
November 10, 2020
Marge brought so much Love and Light to everyone she met. Her smile and laughter will always be with us.
Jamie
Jamie Rodriguez
Friend
November 9, 2020
Please accept my condolences at the passing of dear sweet Marge.
I will always remember seeing Marge and Elise in MAC classes and walking the halls and locker rooms side by side. What a wonderful woman she was. With love, Myra Friedman
Myra Friedman
Friend
November 8, 2020