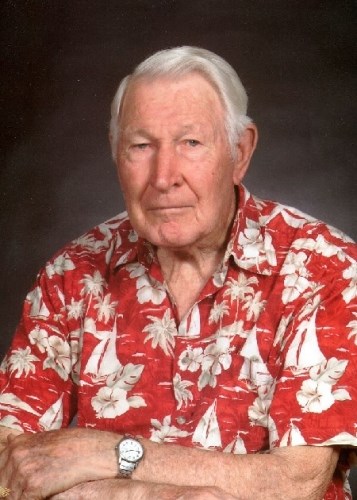 Melvin Neil Westwood, professor emeritus of Horticulture at Oregon State University, passed away on October 31, 2020 due to natural causes at age 97. He had resided at the Oregon Veterans' Home in Lebanon for the past 5 years and considered it home.

Melvin was born on March 25, 1923 in Hiawatha, Utah to Neil and Ida (Blake) Westwood, the second-born of nine children. Within the first half-year of his life, his family moved to Moab, Utah to live adjacent to his grandparents on the Westwood homestead. He grew up on the farm where he learned to raise livestock and harvest produce. During his high school years, he set his sights on becoming a scientist. He was class valedictorian and captain of the football team at Grand County High School, Class of 1941. It was in Moab that he met his future wife, Wanda Shields.

During World War II, Melvin served as an engine mechanic on B-24s in the Air Transport Command (ATC), which was a contracted civilian unit attached to the Army Air Corp. They aided the war effort by repairing aircraft, primarily those used to transport supplies to the troops. He was stationed in the Pacific Theatre, mainly Australia & New Guinea, from March 1943 to December 1945. In 1993, he and the other ATC men whom he served with received Air Force credit for the time they had spent in the combat zone. After Melvin returned home from overseas, he was drafted into the Army Air Forces and served again from June 1946 until his honorable discharge in February 1947.

Post-war, he married Wanda Shields in October 1946. The young couple moved several times in the subsequent years as he pursued his education. During those years, they had four children: Rose, Nancy, Robert, and Kathryn. Melvin and Wanda celebrated 60 years of marriage prior to her passing in August 2007.

Melvin earned a B.S. degree in Pomology from Utah State Agricultural College in 1953, Logan, Utah. He earned his PhD from Washington State College in Pullman, Washington in 1956. During his college years, Melvin participated in Reserve Officers' Training Corps (ROTC) earning the rank of Second Lieutenant.

His professional years were spent researching and teaching Pomology. He worked with the U.S. Department of Agriculture (USDA) in Wenatchee, Washington from 1956 to 1960 and as a professor of Horticulture at Oregon State University in Corvallis from 1960 until his retirement in 1983. Melvin helped establish the USDA National Clonal Germplasm Repository (NCGR) in Corvallis, Oregon; he served as it's Research Director in 1980-1982; and was the National Technical Advisor for germplasm in 1983-1986. He wrote over 200 research articles, 9 books, and co-authored 5 other books. He is known for his textbook Temperate-Zone Pomology, which was translated into more than 12 languages, and continues as the text for many university pomology classes. He received 15 career awards for his research in rootstock physiology, fruit germplasm, and service to the fruit industry. In 1974, he was elected as a Fellow of the American Society for Horticultural Science (ASHS), and in 1980, he won the prodigious Wilder Medal of the American Pomological Society. He also patented an ornamental pear clone that he named Autumn Blaze. Melvin's renown as a scientist took him around the world in the 1980s, allowing him to visit scientists and collect plants in the U.S.S.R, China, South Korea, Japan and Taiwan, among other places.

He was preceded in death by his parents, his wife, and his daughter Rose Merrick. His siblings Richard Westwood, Kenneth Westwood, Dorothy Huff, and Clyde Westwood also predeceased him.

There will be a private service for immediate family, with future plans to hold a larger celebration of life when it is safe to do so. In lieu of flowers, donations to The Carter Center (www.cartercenter.org), Benton Habitat for Humanity (www.bentonhabitat.org), or Corvallis-Albany NAACP (www.naacpcorvallisbranch.com). Arrangements are entrusted to McHenry Funeral Home in Corvallis.