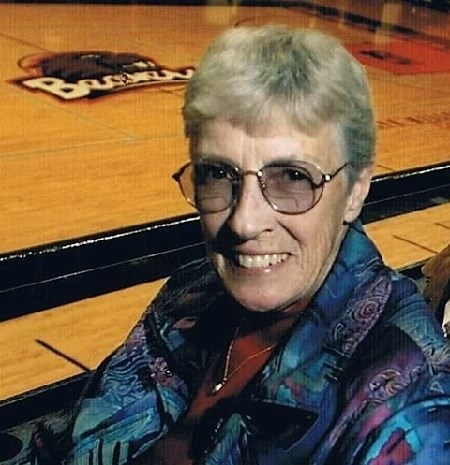 Pat Ingram, 90, died October 6, 2020 from age-related causes, leaving a legacy of love for treasured friends, for OSU women's athletics and for nature's wonders. Now she can run with her wolves and soar with her eagles.

Pat was born in Portland, December 9, 1929 and grew up in Everett, Washington. Her parents, Helen Leathers Ingram and Oliver Ingram, and her brother, Bill Ingram, preceded her in death. A niece and nephew survive.

After completing a BS in education and a minor in music from Western Washington in 1954, for 10 years Pat taught high school physical education and health and coached in Campbell, California and Bellingham, Washington. In 1965, she earned a MS in education from the University of Oregon.

Her journey as an educator led her to Portland State College for three years, followed by teaching in Perth, Australia. Pat spoke ever-so fondly of that two-year experience with the Aussies.

In 1969, Pat began her two-decade career at Oregon State where she emerged as a role model and trailblazing force for OSU women. Soon, she found herself right in the middle of the national women's movement for equality.

After the enactment of Title IX in 1972, Pat was appointed the first director of OSU's Women's Intercollegiate Athletic Department.

In 1974, she secured an invitation for OSU to host the 1975 national AIAW women's collegiate track and field championships. Pat served as meet director, hosting 500 competitors and 200 colleges, record participation at the time.

In the fall of 1975, Pat, an Assistant Professor of Physical Education, returned to her original passion for training teachers and became the Supervisor of Student Teachers, an assignment she held until her faculty retirement in 1988.

For more than 20 years, Pat's summer occupation was far from education. She worked for the United States Forest Service "on tower" as a fire lookout. She served on the first women's trail crew.

After her OSU retirement, Pat enjoyed golfing, reading, and woodworking during many active years on her small tree farm near Philomath. In 2013, she moved to Stoney Brook Lodge in Corvallis.

Pat continued her active support for OSU, establishing a women's athletic scholarship in 2007 and nurturing it with pride. She worked to reestablish track and field and build the new facility. Pat could be seen at nearly all women's basketball games. "Go Beavs!" "And teach those girls to jump."

In 2013, she was selected by the OSU Women's Center as a "Woman of Achievement" and "recognized as a trailblazer whose courageous efforts remain timeless and continue to illustrate what can be accomplished when one's quest for equality impacts the positive quality of life for Oregon State women."

Pat was inducted into the Oregon State University Sports Hall of Fame, Class of 2015. She was honored for "paving the way for what women's athletics at OSU are today."

In memory of Pat, contributions may be made to the Pat Ingram Scholarship Endowment Fund at the Oregon State University Foundation, 4238 SW Research Way, Corvallis, Oregon 97333. A celebration of life will be held at a later, safer date. Arrangements by DeMoss-Durdan Funeral Home www.demossdurdan.com

To plant trees in memory, please visit our Sympathy Store.
Published by Corvallis Gazette-Times on Oct. 18, 2020.
MEMORIAL EVENTS
No memorial events are currently scheduled.
To offer your sympathy during this difficult time, you can now have memorial trees planted in a National Forest in memory of your loved one.
Funeral services provided by:
Demoss-Durdan Funeral Home
GUEST BOOK
0 Entries
Be the first to post a memory or condolences.