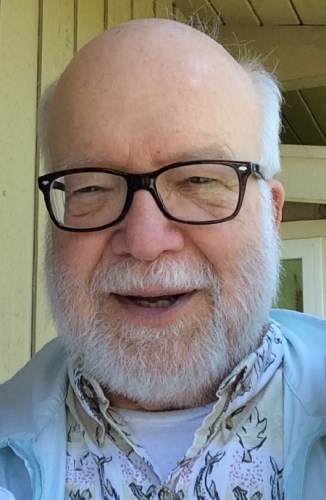 Bob was born and raised in Chicago, in a home built by his maternal grandparents from Bohemia. He was the elder child of businessman Lloyd and school teacher Elsie. During WWII the family had a victory garden in the backyard, and his mother pickled pigs' feet and made soap. His grandmother Mary (Nana) continued to live with them because her husband had died during the 1918 influenza pandemic. Young Bobby also enjoyed the support of his mother's best friend Ruth, whom he always remembered with respect and fondness.

Bobby did well in the public school system, attending Lowell Elementary and Kelvyn Park High School where he played the tuba poorly though he deeply enjoyed listening to music. His favorite subjects were art, math, and science. Bob was inducted into the National Honor Society in May 1952 and earned prizes at the Chicago Student Science Fair for his cloud chamber and his exhibit on chromatography. An article in a 1953 issue of the Panther, the Kelvyn Park newspaper, notes that "Bob's friendly smile and delightful personality makes a combination that is hard to beat." Bob was one of the top ten students in his graduating class of about 200; eight of the others were girls. Childhood summers were spent joyfully swimming and playing on the beach at the family's summer home in Dune Acres. During his high school years, Bob attended Summer Naval School at Culver Academy in Indiana; he enjoyed the sailing but not the military life-style.

Bob left Chicago in 1953 to attend Reed College, which had recently been featured in The Saturday Evening Post. There he enjoyed studying physics with his fellow students in the so-called Rumford Society, several of whom became life-long friends: Larry, Gene, Chris and Peter. Bob also enjoyed learning about the humanities, particularly from world-class calligrapher and humanist Lloyd Reynolds who was one of the few Reed professors interested in synthesis rather than analysis. In his senior year at Reed, his physics professor was disappointed that Bob chose to take Reynold's Graphic Arts Workshop rather than an extra physics course. Bob loved calligraphy and he adopted italic handwriting for everyday use throughout his long teaching career. In later years he was a member of the Goose Quill Guild in Corvallis, studied calligraphy with OSU Art Professor Allen Q Wong, and wrote out wedding and birth announcements for his family.

It was at Reed that Bob met his first wife Sheila. They were married in 1958 while Bob was a graduate student in modern physics at the University of Oregon. His career took an unexpected turn as a result of academic politics: his studies at U of O were interrupted because his thesis advisor was given notice to leave although the preceding department chairman had given him a firm promise of tenure and promotion. Bob and his fellow students were cast adrift, and eventually found their way to Oregon State University where Professor Wayne Burt was just beginning a new program in oceanography. Thanks to a very competent young secretary Bob signed on as the first graduate student in physical oceanography in the fall of 1960.

Bob's thesis advisor at OSU was June Grace Pattullo, who had studied with Walter Munk at Scripps Institution of Oceanography in La Jolla, California, and she was the first woman in the U.S. to get a PhD in physical oceanography. June was an excellent mentor and she encouraged her students to collaborate not only with each other, but also with colleagues in other disciplines and other institutions. Her senior students Curt Collins, Bob Smith, and Chris Mooers got along very well together, and their work focused on the local ocean off Newport; together they undertook pioneering measurements of the currents over the continental shelf as well as seasonal monitoring of coastal upwelling and down-welling; they all became internationally known leaders in coastal oceanography.

After completing his PhD in 1964, Bob took a NATO Postdoctoral Fellowship at National Institute of Oceanography in England before returning to Corvallis as an assistant professor. After a few years he felt the need to spread his wings further afield, and he took leave from OSU in 1969 to serve as scientific officer with the Office of Naval Research, travelling around the country for site visits at various oceanographic institutions to evaluate their research programs and proposals. Two years was enough to convince him that the collaborative spirit at Oregon State in Corvallis suited him far better than the narrow focus or internal competition he observed elsewhere, and so he was content to return to OSU in 1971.

Bob was a leader in the NSF-funded Coastal Upwelling Experiment (CUE) in 1972-1973 off Oregon, and follow-on experiments off Northwest Africa and Peru, with colleagues Jim O'Brien (Florida State), David Halpern (NOAA), Richard Barber (Duke), Ekki Mittelstaedt (Hamburg) and many others. He worked closely with OSU's John Allen in CODE and SuperCODE off California. Bob was vital in OSU's participation and leadership roles in the many large-group, collaborative observing programs that followed, and he helped foster the tone for collaborative research in OSU's Oceanography for many years. Bob was named a Fellow of the American Association for the Advancement of Science in 1990, and he served as editor of Progress in Oceanography from 1984 to 2002. He very much enjoyed sabbatical studies in Germany, Wales, and especially at CSIRO in Hobart, Tasmania. Bob was advisor, mentor and good friends to many students, postdocs, and technicians, and he treated them all with fond respect, regardless of age, gender or position. Bob was always a terrifically collegial scientist and a great host, and he will be greatly missed by his many colleagues in Corvallis and throughout the world.

Beyond oceanography, Bob enjoyed the good things in life: swimming, walking, wine, food, art, music, Shakespeare, religion, history, and of course his grandchildren. His friendly good nature extended into all these areas. He invited his winemaking friend David Lett of Eyrie Vineyards to come to sea on the RV Wecoma, and he purchased a vintage bottle of pinot noir to give to each grandchild on their 21st birthday. He enjoyed hosting small dinner parties at home, always telling the guests not to bring wine because he had too many bottles in the basement. Reed College remained important to Bob, and he was very pleased to have one son and one grand-daughter become Reed alumni. He loved the Oregon Bach Festival in Eugene, and was especially inspired by the major Bach choral works conducted by Helmuth Rilling and Matthew Halls. He was a member of St Mary's Catholic Church in Corvallis and was friends with the monks at the Benedictine Abbey in Mt Angel and the Trappist Abbey in Carlton, Oregon. In recent years Bob's weekly round of meeting with friends (for water exercise or coffee or beer or bible study) grew more and more important. And then, in March 2020, all of those activities ended abruptly, and his joy began to fade.

Bob is survived by his second wife Jane, his children Suzanne, Sean and Colin, his children-in-law, and his grandchildren Ella, Adriana, Anna, Celine, Teilo and Kayna, and his many friends in Corvallis, Eugene, and the wider world. We will all miss him deeply for many years to come. Please leave condolence messages for the family at www.demossdurdan.com

To plant trees in memory, please visit our Sympathy Store.
Published by Corvallis Gazette-Times on Nov. 24, 2020.
MEMORIAL EVENTS
No memorial events are currently scheduled.
To offer your sympathy during this difficult time, you can now have memorial trees planted in a National Forest in memory of your loved one.
GUEST BOOK
1 Entry
I just heard the sad news. During my 12 years at OSU from the late 1960s to the early 1980's Bob was one of my favorite people. His professional competence and unflappable and friendly personality created an unmatchable combination for a fun colleague and great friend. Lorna and I will miss him.
Ross Heath
December 8, 2020