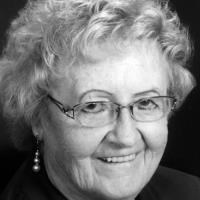 FUNERAL HOME
Martin Mortuary
550 North Ave
Grand Junction, CO
Agnes Lunsford
September 25, 1933 - December 23, 2018
Agnes Lunsford passed away on December 23, at home with her beloved husband by her side, she was 85 years old.
Agnes was born in the Czech Republic and moved to Germany when she was eight years old. She met her husband, JD, while he was stationed in Germany serving in the US Army. Agnes returned to the USA with JD and they were wed August 1958.
Agnes was a wife, mother and homemaker. She raised three children and was very active in her grandchildren's lives.
She attended and was involved in Grand Junction First Assembly (now Victory Life Church).
Agnes is preceded in death by her parents and siblings. She is survived by her husband, JD; sons, Bob and Jim (Misty), and daughter, Shelly. Agnes is also survived by six grandchildren and two great-grandchildren.
Services will be held Victory Life Church on Wednesday, January 2, at 11:00 a.m.
Published by The Daily Sentinel on Dec. 30, 2018.
To plant trees in memory, please visit the Sympathy Store.
MEMORIAL EVENTS
To offer your sympathy during this difficult time, you can now have memorial trees planted in a National Forest in memory of your loved one.
Funeral services provided by:
Martin Mortuary
MAKE A DONATION
MEMORIES & CONDOLENCES
4 Entries
I just today learned of Agnes's passing. So many beautiful memories of times with her and the family. She and JD were such a part of my life for so many years. I love you all and am praying for you! Helen McPherson
Helen McPherson
January 16, 2019
JD and Lundsford family, My heart felt condolences to you all. May God fill you with His peace and comfort as your thoughts are of your wife, mother, and grandmother.
Kyle Vanderberg
January 2, 2019
Agnes was a much-loved part of Victory Life Church for many years and she will be greatly missed by us and everyone who knew her. Our prayers go out to J.D., Shelly, Bob, Jim, and the entire family in the loss of a wonderful wife, mother, grandmother and great grandmother.
Kenny & Neva Banks
December 30, 2018
JD and family, so sorry to hear about Agnes. We loved her so much and miss seeing you as we haven't been able to go to church for a long time. She was a very special loving person. Sorry we aren't able to come to the funeral but our prayers are with you all. Love, Ed and Jan Dow
December 30, 2018
Showing 1 - 4 of 4 results