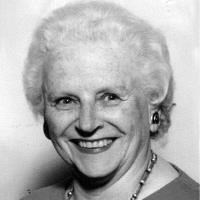 Evelyn L. Haley
December 24, 1923 - May 21, 2018
Evelyn never wanted an obituary as such, but in liquidating her trust I have decided her story needs to be told. She is leaving quite a legacy.
I am Evelyn's youngest sister. Evelyn was born in Albuquerque, NM, December 24, 1923. She was the oldest of three girls. The family moved to Paonia in 1925. Evelyn's sister, Vivian, was born in 1926. The family engaged in fruit farming and purchased their own farm in 1939. Sister, Earlana was born in 1940. Evelyn graduated from Paonia High School in 1941. She spent one year at Western State College in Gunnison. In the summer of 1942 she went to California to see Glen Haley before he left for service in the Army. They were married on September 26, 1942 in Englewood, CA.
Evelyn stayed in California and enrolled at UCLA, graduating with honors in 1946. After the war the couple taught school in Blythe, CA, for a few years and then returned to the Los Angeles area. Evelyn went to work in the city clerk's office in Burbank, CA and worked her way up to assistant clerk. When her boss decided to retire she encouraged Evelyn to run for the office of city clerk. Evelyn was a very private person and didn't think she could handle all that went with running for public office. Evelyn and her boss were discussing the matter one day when a man walked in to file paperwork to run. He heard them talking and said, "Well, this is a job for a man anyway." That was all it took. Evelyn ran for the job and again every four years. She held that job for over 30 years, retiring in 1984.
The Haleys spent a year in Battlement Mesa before moving to Edmonds, WA. Glen's health began to fail in the late 1990s. The family urged them to move closer. They moved to Grand Junction in 1999.
The Haleys saved and invested well, giving to numerous charities and projects. Evelyn continued after Glen's passing in 2004. Charities designated in Evelyn's trust include, HopeWest, Rocky Mountain Public Television, Consumer Reports, Conservation Colorado, Mesa County Public Library Literacy Program, and Roice-Hurst Humane Society. The majority of the trust went to Western Colorado Community Foundation. In the past gifts have included: Western State College, Paonia Public Library, Paonia Christian Fellowship, Habitat for Humanity, Paonia High School Flight of the Eagle, and many others.
Evelyn passed away on May 21, 2018, at her home in Grand Junction. Her generosity will be a living legacy for many years to come.
Sisters, Vivian Hadley of Salt Lake City and Earlana Sims of Paonia survive.
Memorial contributions came be made to the PHS Alumni Scholarship, at the FCNB, PO Box 100, Paonia, CO 81428.
Published by The Daily Sentinel on Oct. 28, 2018.
To plant trees in memory, please visit our Sympathy Store.
MEMORIAL EVENTS
To offer your sympathy during this difficult time, you can now have memorial trees planted in a National Forest in memory of your loved one.
MAKE A DONATION
MEMORIES & CONDOLENCES
1 Entry
While I did not know Ms. Haley, I truly enjoyed reading about her legacy. Thank you for sharing her story. I am grateful for her generosity and support of the community.
B Stewart
November 2, 2018
Showing 1 - 1 of 1 results