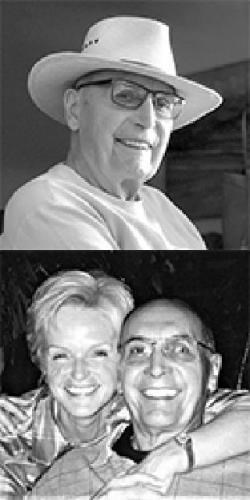 He is survived by his loving wife, Pat; his six children, Tracy, Layne, Dana, Page, Darren, and Anne, along with 11 grandchildren; sister, Gwen, and brother, Berwyn. He was Gerry to his wife and friends, Dad to his kids and Poppa to the grandchildren.

From being raised in a small home with dirt floors in Montney British Columbia during the depression, to passing in his and Pat's beautiful home in Grand Junction, literally tells the story of an adventurous life and the long and successful journey of Gerry Tucker.

Gerry developed the largest oil contracting company in BC and owned an assortment of businesses. In the 1970's he was honored as "Man of the Year" in Western Canada. He and Pat also developed, invested in and sold real estate. They worked side by side for their entire relationship. He loved to work, and had an insatiable work ethic. He and Pat eventually settled in Grand Junction where they purchased US Sack and then started Conquest Developments which invested in and developed real estate. They were pillars of the community and assisted each other in their efforts to support Grand Junction.

They traveled the world together and had friends scattered across the globe. In addition, they also visited all 50 states in the US on a variety of trips.

He was the best role model. His kindness, astute business mind, love of learning, and love of music will always be remembered. He had a passion for music and his favorites were old country classics by singers like Johnny Cash and Willie Nelson. His love for music extended to his love for playing his favorite instruments including the guitar and harmonica and oh how he loved to sing. He also liked to recite poems including Robert Service and among his favorites was Sam McGee.

He treated everyone with respect; young, old, rich and poor. He had many friends including bankers, politicians and lawyers but he would happily spend an afternoon playing his guitar with the street musicians of Torremolinos and then make lifelong friends with them.

Gerry touched so many people with his generosity and wisdom. He may be gone, but his understanding, his love, his guidance and his amazing sense of humor will live with many of us forever.

The family are extremely grateful to the wonderful help and care provided by HopeWest Hospice and Gerry's kind caregivers, Tess and team.

The family held a service and celebration of life ceremony at his home on Saturday, October 23, 2021, for family members and close family friends. If desired friends may make memorial contributions to HopeWest, in lieu of flowers. Condolences and memories may be left at browns.creamationservice.com.
Published by The Daily Sentinel from Oct. 28 to Oct. 31, 2021.
To plant trees in memory, please visit the Sympathy Store.
MEMORIAL EVENTS
To offer your sympathy during this difficult time, you can now have memorial trees planted in a National Forest in memory of your loved one.
MAKE A DONATION
MEMORIES & CONDOLENCES
1 Entry
Sorry to read of Gerry's passing, he will truly be remembered for his love of life and others. My thought are with your family.
Kelly McCarty
Work
November 1, 2021
Showing 1 - 1 of 1 results