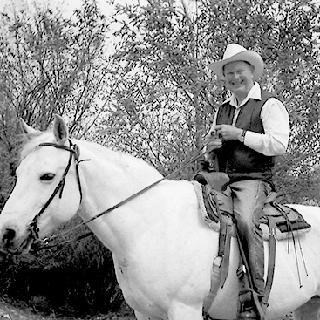 Howard was born April 7, 1927, to Judd and Maude Cowan in Loves Park, Illinois. When Howard was three years old, he and his parents, brothers, Allen and Grant, and sister, Evelyn, moved to a farm near Broadhead, Wisconsin. After graduating from Broadhead High School and Minnesota Bible College, he married Patricia Falter of Janesville, Wisconsin, in 1951. Together they celebrated 70 years of marriage and had two daughters, Judy and Peggy.

Howard and Patricia served with churches in Illinois, Wisconsin, Michigan, and Colorado. He was passionate about sharing his love for Jesus. Howard was an avid outdoorsman who enjoyed horses, hunting, hiking, camping, and fishing. Highlights of his adventures were two visits to Alaska with his wife.

Preceding him in death were his parents, Judd and Maude Cowan; brothers, Allen and Grant Cowan, and sister, Evelyn Stelse.

Celebration of Howard's life will be held at Delta Christian Church, Friday, November 26, at 10:00 a.m.