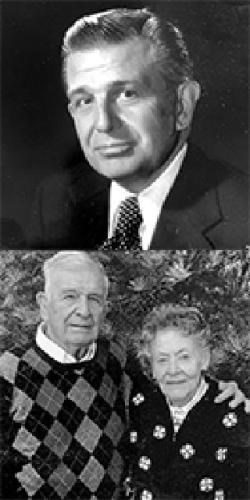 Lawrence Edward Hegstrom went to meet his Lord and Savior, Jesus Christ, October 4, 2021, in Grand Junction, Colorado. He was the devoted husband of Rose Mary Hegstrom for 72 years, preceding him in death September 20, 2021. A mere 14 day span separated their eternal lives together. Just as Christ is the cornerstone of the church, Larry was the cornerstone of our family leading with grace, strength, gentleness and love. "The stone which the builders rejected has become the chief cornerstone. This was the Lord's doing: It is marvelous in our eyes," Psalm 188: 22-23. He was a gift to Rose Mary and marvelous in our eyes. The family is grateful for both of their long lives.

He was born May 3, 1926, in Denver, Colorado, to Lawrence Eric Hegstrom and Agnes Florence Nelson. He attended Pueblo Central High School graduating in 1944. Called to duty November 24, 1944, he served in the US Air Force as an aircraft radio repairman assigned to the Asiatic-Pacific theater of Okinawa during WWII. After his honorable discharge from the Air Force, November 18, 1946, he attended Denver University, graduating December 9, 1949, with a Bachelor of Science from the College of Business Administration. While at DU he was a member of Alpha Kappa Psi fraternity.

On September 10, 1949, Larry married Rose Mary Todd of Pueblo, Colorado, at the First Baptist Church which they had both attended since childhood. He was a member of that church for 74 years serving as building chairman, Board of trustees and deacon.

The couple moved to Chicago where Larry worked as an accountant for Arthur Andersen Company. They soon returned to their home town of Pueblo where he began a 37 year career at C. F. and I Steel Corporation, serving as Assistant Divisional Controller, and manager of Employee Benefits/Industrial Relations. He was a graduate of the Alexander Hamilton Institute of Modern Business, 1971.

While in Pueblo Larry served on the board of Delta Dental Co., and on the St. Mary Corwin Hospital Board of Directors for multiple years. He was appointed to the State of Colorado Health Council during the administration of Governor Richard Lamb. Being a long time member of Kiwanis Club he served as president of the Pueblo Club 1972-1973, and Governor of the Rocky Mountain District of Kiwanis 1979-1980. He was a member of Masonic Lodge #17AF&AM. Larry was a long time member and board member of Pueblo Country Club enjoying golf and friends of the club.

Larry and Rose Mary moved to Grand Junction, Colorado, in 2009 to be closer to their son, Todd, and four grandchildren. They joined the First Presbyterian Church of Grand Junction.

In lieu of flowers please make contributions to Pueblo Kiwanis Club or First Presbyterian Church of Grand Junction.
Published by The Daily Sentinel on Oct. 17, 2021.
To plant trees in memory, please visit the Sympathy Store.
MEMORIAL EVENTS
Nov
6
Memorial service
11:00a.m.
Mt. View Cemetery Mausoleum
Pueblo, CO
MAKE A DONATION
MEMORIES & CONDOLENCES
1 Entry
Todd, I'm very sorry to see of the passing of your father. Loosing both your parents in a matter of 2 weeks I'm sure is overwhelming. My heart and prayers are with you, Angela, and all your family during this very sad time. God Bless.
David Terry
October 24, 2021
Showing 1 - 1 of 1 results