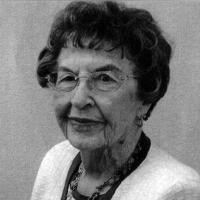 FUNERAL HOME
Martin Mortuary - Grand Junction
550 North Ave
Grand Junction, CO
Pauline Edith Fisher
December 31, 1923 - May 31, 2015
Pauline Edith Fisher, 91, passed away at Larchwood Inns of Grand Junction.
She was born to Earl E. and Susan Agnes Helwig, December 31, 1923, in Perris Valley, CA. When Pauline was six months old, her mother passed away and she went to live with and was raised by her mom's Aunt Susie and Uncle Fred Sutton. Her dad, Earl,was a career Naval Officer away at sea most of the time.
Pauline studied music at Riverside College and received a degree at Redlands University in Redlands, CA. She operated her own music studio where she taught fifty lessons a week. She was a professional pianist and accompanied various musical groups in the Riverside area. When Fred Waring and the Pennsylvanians came to California to perform, she was their accompanist.
She met a farmer-rancher from Wessinton, SD during a visit with mutual friends in Riverside. She married that South Dakotan, Kenneth Fisher, on June 12, 1958, and the California city girl moved to rural South Dakota.
Pauline and Kenneth traveled to every state in the Union and every Province in Canada. They aslo toured Australia and New Zealand. Later they spent their time wintering in Florida and South Bimini Island and summering in Minnesota and Canada. In the spring of 1994 they moved to Scottsbluff, NE. Kenneth died in August and Pauline moved to Grand Junction, CO in 1996.
She made several European tours. The Grand Junction Symphony Guild and First Presbyterian Church, where she sang in the choir, were important in her life. In 2004 Pauline moved to Hilltop Commons, where she injoyed entertaining friends by playing her grand piano. She later moved to Larchwood Inns.
Pauline is predeceased by her parents, her grand aunt and uncle, her husband and nephew, Brent Helgelien. Survivors include stepson, Gary (Sherry) Fisher; step-granddaughters, Lisa Fisher and Rachel Dowse of Florida; neice, Annette (Duane) Helgelien; grandniece, Brenda (Eric) Herring; great-nephews, Brandon and Evan Herring, all of Fruita. Also her special caregiver, Judy Kroeger, Grand Junction.
A Memorial Service will be held, Wednesday, June 10th, at 10:30 a.m. in the chapel at Larchwood Inns, 2845 N. 15th Street, Grand Junction.
Memorials to HopeWest Hospice would be appreciated by the family.

Published by The Daily Sentinel on Jun. 7, 2015.
To plant trees in memory, please visit the Sympathy Store.
MEMORIAL EVENTS
To offer your sympathy during this difficult time, you can now have memorial trees planted in a National Forest in memory of your loved one.
Funeral services provided by:
Martin Mortuary - Grand Junction
MAKE A DONATION
MEMORIES & CONDOLENCES
1 Entry
Annette & Duane, we are sorry for your loss. Thoughts and prayers to you and your family. - Cecil & Mary Ann
Mary Ann Tapey
June 9, 2015
Showing 1 - 1 of 1 results