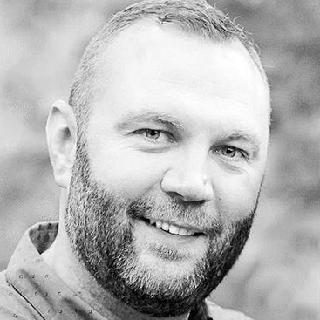 Richard was born on June 24, 1983, in Minot, North Dakota, to James and Tammy Hopkins. As a young boy Richard enjoyed playing baseball, playing football, and riding BMX. In high school he began to race motocross alongside his uncle. On weekends his father took their whole family along to support him in many races all around the region. Richard graduated from Grand Junction High School in 2001, and went on to receive his Bachelor of Science in Mechanical Engineering (2006) from Colorado State University (CSU) in Fort Collins, Colorado.

Richard met the love of his life, Rebecca, in 2001 at the Allison dormitory at CSU. After graduating in 2006, Richard proposed to Rebecca during a family vacation in Jamaica. In the summer of 2006, he moved to Chicago to join Rebecca and worked for WMA Consulting Engineers. Richard and Rebecca were happily married in Denver in 2007.

The couple left Chicago in 2011 and moved to Denver, where they bought their first home together. In 2013 they rescued Betty, their black lab. In Denver, Richard worked as a mechanical engineer for WSP, an engineering firm that specialized in hospitals and healthcare projects. He was recognized by the 40 under 40 up-and-coming engineers in 2015.

In 2018, the couple moved back to Richard's hometown of Grand Junction where he became Vice President of the family's HVAC and plumbing business, Haining/Airtech. Richard had planned to take over his parent's legacy and run the company one day.

In 2020, Richard and Rebecca purchased a 1960's mid-century modern style home and began renovating it into their dream home. In July of 2021, after a long journey, Richard and Rebecca welcomed their first child, Eleanor Edith Hopkins. Richard was so proud to be a father.

Among many things, Richard was the man with all the answers. He was an impressively smart problem solver who knew how to fix almost anything, and if he didn't, he knew how to find a solution. He never quit anything he started. Richard was a bit of a geek, a tad sarcastic, and he had a love hate relationship with technology. He was a mentor to his two siblings, who truly looked up to him. Richard was a passionate person who upheld many extracurricular activities. He liked to challenge himself by mountain biking, road cycling, triathlons, cross country skiing, stand up paddle boarding, and golfing. As a talented musician, Richard enjoyed playing old timey folk music on his guitar, banjo and fiddle. He loved all genres of music and always had music playing at home, in the car, and at work. He was hilarious and could always be counted on to make everyone around him laugh. He brought us to tears quoting lines from movies, channeling various comedians, and laying on a good dad joke. Richard always tried to do everything 100% correctly and to the very best of his ability. He took immense pride in his work and his family, and everything he touched he made better.

Funeral services will be at Immaculate Heart of Mary Catholic Church in Grand Junction, CO, on Saturday October 23, at 10:00 a.m. with a Celebration of Life to follow.

In lieu of flowers the family asks you to send donations in Richard's honor to littlekidsrock.org Music Education Nonprofit. Jim Bodine CJS Heating and Air
October 26, 2021
Jim, Family, Friends & Colleagues, my thoughts and prayers are with you all. My deepest sympathies.
Missy Jones
Work
October 25, 2021
Rebecca and family, we are deeply sorry about the loss of Richard. Sending you so many thoughts and prayers during this difficult time. Mike, Muriel, and Isabel on behalf of Aspenhills Consulting.
Aspenhills Consulting
Work
October 25, 2021
Rebecca, on behalf of Trimble, my deepest condolences for your tragic loss. When one of us hurts, we all hurt.
Rob Painter
October 21, 2021
Jim, Tammy, and Family, I am very grief stricken to hear of the loss of Richard. May the love of friends and family carry you through your grief.
Steve Christianson
Friend
October 20, 2021
Showing 1 - 5 of 5 results