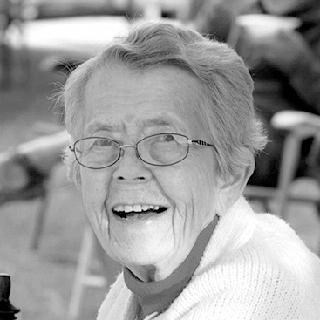 Bobbi was born February 27, 1931, in Rifle, CO. She was the eldest child of Charles "Charlie" Benson, a cattle rancher, and Ruth Funk Benson, a schoolteacher, of Parachute (Grand Valley), Colorado. She was raised on the Benson cattle ranch on Parachute Creek, this necessitated working hard from a young age as she was her dad's right-hand man. She began pushing cows when four years old, becoming an accomplished horsewoman. She made handling difficult horses and driving a working team look easy. Horses were her best friends, especially Cricket.

The Benson home was filled with love, laughter and music. Many days ended with the family laughing at their mishaps and close calls; there Bobbi learned to face adversity cheerfully. The love of music carried over into the community and they often performed together. Bobbi attended the Granlee School on Parachute Creek as a child, graduated from Grand Valley High School as Valedictorian, and then attended Colorado State University, majoring in Home Economics.

She was working as a switchboard operator for the telephone company when she met Marvin Wambolt. They married in June of 1952 and lived in Grand Valley for several years, then in Smith, Nevada, then Denver, before returning to Grand Valley. They ran the Grand Valley Lumber and Supply Co., and Bobbi worked for the Postal Service. After Marvin passed she ran the local donut shop. She was a talented seamstress and sewed most of her daughter's clothing, provided alterations, sewed down jackets and vests, Raggedy Ann and Andy dolls, and many many cheerleading uniforms.

She was a member of the Grand Valley's United Methodist Church and The Home Culture Club. She enjoyed entering baked goods in the Garfield County Fair and was renowned for her angel food cakes with orange frosting. She was an avid Denver Broncos fan since 1960. Their home was a gathering place for many occasions and their annual Christmas Party was legendary.

Bobbi was diagnosed with Multiple Sclerosis at the age of 37 and supported many who faced similar challenges. She moved in with her son's family in Star in 2014, where she became Gramma Bobbi to everyone. She loved unconditionally and inspired those around her with her consistent, quiet determination.

In lieu of flowers the family requests donations to the Pam Brock Scholarship; https://www.grandvalleyeducationalfoundation.org.
Published by The Daily Sentinel on Oct. 24, 2021.
To plant trees in memory, please visit the Sympathy Store.
MEMORIAL EVENTS
Oct
30
Memorial service
1:00p.m.
Battlement Mesa Fire Protection District
0124 Stone Quarry Road, Parachute, CO
MAKE A DONATION
MEMORIES & CONDOLENCES
4 Entries
My condolences to the Wambolt family. A great lady!
Tom Rich
October 29, 2021
What a neat lady, always a smile. She was one of our first friends in Parachute, she helped us make the transition to small town living.
Brent and Tweedy Sprague
Friend
October 29, 2021
She was a inspiration to many of us
Vera Stanton Madden
October 24, 2021
I'm going to miss my dear friend, hugs and prayers for the family.
Myron Mackey
Friend
October 24, 2021
Showing 1 - 4 of 4 results