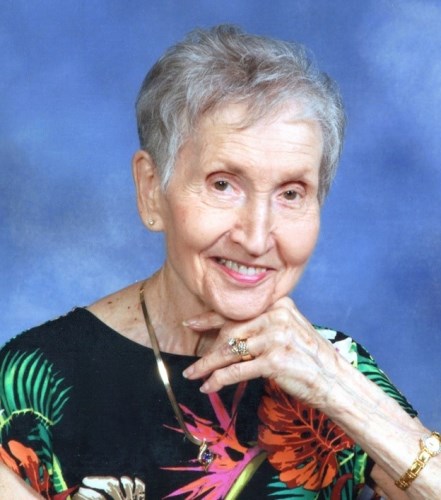 On June 2, 1948, Delores married Roy H. Hanson at St. James Catholic Church, Forest city. They farmed east of Forest city. To this union two sons, Randolph Craig and Ronald Andrew were born. Roy died on March 3, 1953. Delores and sons moved to Forest City to live with her parents. She was employed by a law firm and later in the Insurance and farm supply departments at the Winnebago county Farm Bureau. While living in Forest city she taught St. James Catholic Church religion classes, sang in the choir and belonged to a church circle, a bowling league and the forest city Community theatre.

Delores led a rich full life. Her faith, family and friends were her most prized possessions. She was active in St. Patrick's Ladies Guild, study groups, coordinated the first St. Patrick's CCD classes, Grand Regent of Lady of the Lake CDA Court chaired several parish fund raising projects, sang in the choir, and served as RCIA coordinator for three years and Eucharistic minister for 22 years. While her sons were in school she belonged to PTA and was a Cub Scout den mother. She was proud that all three sons became Eagle Scouts. She was employed part-time as office manager of Kimball-White Seeds, Inc. for six years, worked for the lase firm of Boyle Schuller and Oltrogge, and the Kouri, Peterson, Anderson CPA firm. She served in the appointed position of Clear Lake City Treasurer for seven years. She assisted her husband in the Clear Lake Grain Co. and Miles Farm Store. Later she worked part-time as St. Patrick's secretary and for the Matthew Berry Law and CPA firm. She began full time employment in 1983 as an executive secretary at Winnebago Industries. She retired from Northern Trails Area Education Agency on June 30 1994. In 2000, she became "Sears Sewing Lady" demonstrating Sears's sewing machines. For four years, after their son Roger's death, Bill and Delores provided supplies for needy area infants through the Baby Corner of North Iowa.

She enjoyed sewing, refinishing and upholstering furniture, gardening, entertaining, reading, nature, walking, golfing, music, and ballroom dancing. Bill and Dee traveled in 44 states and southern Canada. For 11 years they enjoyed spring, fall and Christmas shows in Branson, Missouri. They traveled to Vienna and Czechoslovakia (her father's homeland) in September, 1990. She was a member of Progress Club since 1962. She joined P.E.O. chapter NW in April, 1969. In 2009 she was one of the 22 Iowa delegates to the P.E.O International Convention in San Diego.

To plant trees in memory, please visit our Sympathy Store.
Published by Globe Gazette from Oct. 17 to Nov. 3, 2020.
MEMORIAL EVENTS
Nov
6
Visitation
4:00p.m. - 6:00p.m.
Ward-Van Slyke Colonial Chapel
310 1st Avenue North, Clear Lake, IA 50428
Nov
6
Wake
5:45p.m.
Ward-Van Slyke Colonial Chapel
310 1st Avenue North, Clear Lake, IA 50428
Nov
7
Mass of Christian Burial
10:30a.m.
St. Patrick's Catholic Church
1001 9th Ave. S, Clear Lake, Iowa
Funeral services provided by:
Ward-Van Slyke Colonial Chapel
GUEST BOOK
4 Entries
My thoughts and prayers are with you. What a neat and gracious lady with a zest for life.
Merlea R Schultz
November 1, 2020
Dee was a very dear friend for many years and was one of the kindest, sincere and compassionate lady and she will be missed greatly. God bless her two sons in their loss and all those who loved her dearly.
Gary Hauge
Friend
October 18, 2020
So sorry for your loss. My prayers are with your family.
LaVonne miles(mrs allan miles)
October 17, 2020
We were sorry to hear about the death of Dee. She was such a mentor to me as a young mother in Clear Lake! She was an inspiration to so many! Please know we are thinking of her family and praying for peace and comfort!
Polly Suntken
October 17, 2020