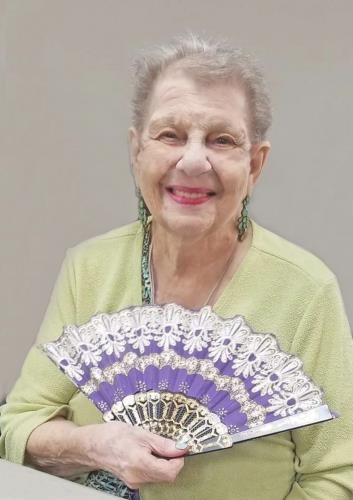 Agnes J. (Falgitano) Garner (91) of Mason City, IA passed away on November 25, 2020 at MercyOne North Iowa Medical Center. She was surrounded by the love of her 6 daughters.

A memorial service will be held in summer of 2021.

Agnes had various waitressing jobs but was most remembered as "Aggie" from Buehlers Cafe where she worked for 11 years. She was housekeeper/care taker for Father Bill Holzer for 18 years (moving to whatever Catholic Church he was assigned to) until he passed away in April 1998. Father Bill and Agnes (mom) were also part of the Lions Club and she enjoyed all the activities and travels that that participation provided them. She moved back to Mason City shortly after he passed.

Her Faith & her Family was most important to Agnes and she enjoyed all forms of contact -- in person, cards, phone calls, etc. She enjoyed crocheting, working her crossword puzzles, and whenever the chance arose, a trip to the casino. She loved going out to eat, especially going to her favorite restaurant Village Court. We take comfort in that she is now resting peacefully in God's hands.

To plant trees in memory, please visit our Sympathy Store.
Published by Globe Gazette on Dec. 1, 2020.
MEMORIAL EVENTS
No memorial events are currently scheduled.
To offer your sympathy during this difficult time, you can now have memorial trees planted in a National Forest in memory of your loved one.
Funeral services provided by:
Hogan Bremer Moore Colonial Chapel
GUEST BOOK
1 Entry
I knew Agnes mainly after she had moved to Mason City. She was on my "Communion Route" from St. Joseph´s. She was a faith-filled woman, but also spirited and fun to visit. She loved to talk about Italian food and Dorothy Garlock novels. But most of all she loved and talked about you girls and your children. She was so proud of you, and you were good to her. She especially loved her birthday outings with you. I am not certain if there was ever a time, when I visited, in which she was not working on an afghan for one of the family. I moved to Minnesota, so sadly I have not been able to spend these last years with her. I do feel fortunate to have known Agnes. May God bless her. Peace be with her and all of you.
Mary Pat Cole
December 1, 2020