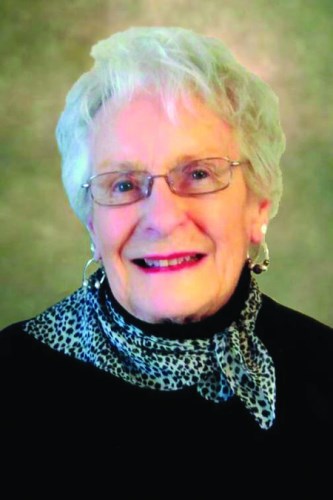 Bernice was born February 24, 1932, in Tipton, Iowa, to Henry and Eunice (Wagner) Wiskus and graduated from Tipton High School in 1950. After graduation, Bernice moved to Cedar Rapids and worked at Wilson & Company. Having met on a blind date, she married Rodney Jones on January 26, 1952; the couple made their home in Vinton. Later they moved their family of six to Mason City where she worked at Key Wholesale Lumber and enjoyed that job very much. The family moved back to Vinton where Bernice began work as Magistrate Clerk for Benton County. She retired after 20 years and then worked at the Vinton Country Club; she was known as "Jonesy" and enjoyed seeing and meeting people.

She enjoyed reading, bowling, golfing, playing cards and was always ready to go whenever a trip to a Casino was mentioned. She especially loved being with her family, grandchildren and great-grandchildren.

She was preceded in death by her parents, her husband, Rod in 1989; and her brothers, Paul and Larry Wiskus.

Condolences may be left at www.phillipsfuneralhomes.com

To plant trees in memory, please visit our Sympathy Store.
Published by Globe Gazette on Sep. 25, 2020.
MEMORIAL EVENTS
Sep
26
Graveside service
10:30a.m.
Maplewood Cemetery
, Vinton, Iowa
Funeral services provided by:
Phillips Funeral Homes - 6th St., Vinton
GUEST BOOK
1 Entry
Theresa, I am so sorry to hear of your sister's passing. I hope you have a lot of memories to help you through this sad time.
Rosemary Buckley Selfridge
Acquaintance
September 26, 2020