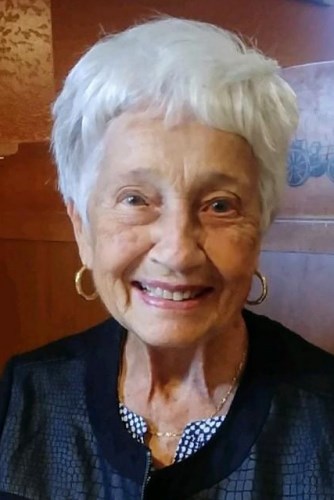 Due to COVID-19, private family services will be held in Memorial Park Cemetery.

Memorials may be directed to the family and may be sent to Major Erickson Funeral Home, 111 North Pennsylvania, Mason City, IA 50401. Online condolences may be left for the family at www.majorericksonfuneralhome.com

Joyce was born on September 8, 1932 in Louisville, KY, the daughter of Rev. Dr. Harry G. and Janet (Grimes) Schwegler. Her father volunteered to become a chaplain overseas for almost four years during WWII and also served several churches across the country, thus the family moved many times and she attended numerous schools. She was thrilled to spend two years at one school- her junior and senior years at McKinley High School in Cedar Rapids, IA- where she met her future husband Herb, became a cheerleader, and was selected as a Homecoming Queen candidate, proudly graduating in 1950. She attended Carthage College in Carthage, IL, where she was employed as a secretary to the Dean of the college. She and Herb were married June 22, 1952 at First Lutheran Church in Cedar Rapids, with her father officiating the service. After college, Herb was drafted during the Korean War conflict. Joyce and newborn daughter Cindy moved to San Antonio to be closer to Ft. Sam Houston. Son Ken would soon join the family. After Herb was discharged from the Army, he began his teaching and coaching career in Ayrshire, IA. Kathy was born during this time. The family moved to Forest City when Herb accepted a teaching and coaching job with the school district. To their surprise and delight, twins Keith and Kirk were born in Forest City, which completed the family. Joyce worked as a very busy, dedicated, and wonderful mother to five young children, who were born within a six year span. In 1967, North Iowa Community College (NIACC) reached out to Herb to become a teacher and head men's basketball coach. The family then moved and settled in Mason City, where Joyce continued to live for over fifty years. Herb passed away in 2006.

Joyce was employed as a secretary and a teacher associate at John Adams Junior High School and later as the office manager for the Senensky CPA firm, from which she retire to provide care for her parents and

mother-in-law. She then worked part time for Kelly Services in their office and in positions where needed.

Joyce was most proud to be a mother, wife, grandmother, and

great-grandmother. She dearly loved her extended family members as well. She loved sports and supported her children in their various activities and athletic endeavors.

She was a fierce competitor in bowling, golf, bridge, and board games, but basketball was at the core of her life. She acted as a second mother to many players on the NIACC Trojans basketball team. She made many meals and baked many pies. The door was always open for players to join the family at holidays and other times. She spent countless nights at games and supported a variety of teams and players at both NIACC and Mason City High School. She was honored when selected to represent the community and Mason City High School, for her sportsmanship and strong character, at the 2015 girl's state high school basketball tournament, where she received a plaque and check for $250.00 to give to the MCHS scholarship fund.

She felt honored to also be the Mason City Bowling Hall of Fame Inductee in 2017, following decades in bowling leagues where she also served as a member and officer in the local league. She missed her many friends there and on the golf course when she could no longer continue in those sports.

She greatly valued being a faithful member of Trinity Lutheran Church for over fifty years and the many friends and pastors she knew there as well. She volunteered as a scripture reader, communion server, confirmation mentor, and prepared and served many meals. With a rock solid faith, it is fitting she passed away during Holy Week.

With a servant heart, Joyce also enjoyed volunteering to deliver Meals on Wheels, to be a Reading Buddy through RSVP at Roosevelt Schools, and to serve on the KCMR Radio Board and Care Review Board at Good Shepherd Health Center. She was involved as a member and officer in the Mason City Women's Club and at Highland Golf Course and was also a bridge marathon member.

Her family often joked she should run for Mayor because "she seemed to know and be liked by everyone in town." Joyce taught, inspired, and supported her children and grandchildren to be responsible, respectful, caring individuals and to always do their best at whatever they chose to do. She radiated energy, happiness, warmth, love, and acceptance towards others. She was a two time breast cancer survivor and was a true

To plant trees in memory, please visit our Sympathy Store.
Published by Globe Gazette from Apr. 6 to Apr. 11, 2021.
MEMORIAL EVENTS
No memorial events are currently scheduled.
To offer your sympathy during this difficult time, you can now have memorial trees planted in a National Forest in memory of your loved one.
Funeral services provided by:
Major Erickson Funeral Home
GUEST BOOK
Sponsored by Major Erickson Funeral Home.
2 Entries
my sincere prayers to a wonderful family.
Robert Seny from mason city
April 17, 2021
To the Konigsmark Family, Sorry to hear about the passing of your mother. May she now rest in the loving arms of Jesus.
Mark Schlatter
April 7, 2021