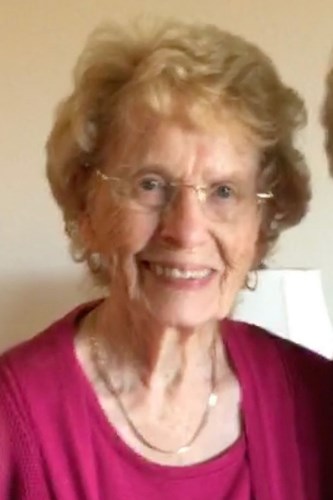 Constance "Connie" Naomi Bruesewitz passed away on Tuesday, August 3, 2021. Connie was born on January 12, 1925, on the Olsen farm between Kensett and Bolan, Iowa, the first child of Gilman and Edna (Anderson) Olsen. As a baby, Connie moved with her parents to Pomona/Claremont, California, where her brother, Gilman Jr. "Bud," was born four years later. Connie and her family returned from California to the family farm in the mid 1930s. She graduated from Kensett High School in 1942.

Connie married Eugene "Gene" Bruesewitz on February 9, 1947, in Albert Lea, Minnesota. Connie and Gene shared over 65 years of marriage together in Grafton, Iowa before Gene's death in 2013. Connie is well known for her leadership in restoring the Grafton Heritage Depot, decades of service to Emmanuel Lutheran Church, and involvement with both Grafton Community Action and the Bolan Schoolhouse and Cultural Center. For many years, Connie was the proprietor of an antique and gift store, the "This n' That Shoppe," in Grafton. She enjoyed reading, antiquing, quilting, traveling, and spending time with her family and friends.

Connie was preceded in death by her husband, parents, and brother.

Her family and many friends will remember and cherish the ease with which Connie laughed and enjoyed what came with each new day and adventure. A visitation open to the community will be held at Emmanuel Lutheran Church in Grafton, Iowa on Tuesday August 10th from 5-7 p.m. The service and burial will be private. In lieu of flowers, memorials may be directed to Emmanuel Lutheran Church or the Grafton Heritage Depot.