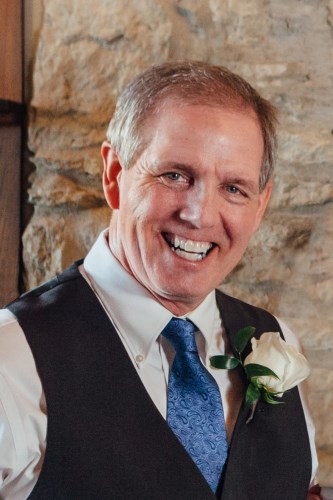 In light of COVID-19, there will be a graveside memorial at Osage Cemetery at 10:30 a.m. on Thursday, December 3, 2020. The family asks that non-immediate family members attending the memorial to please remain in your car to allow immediate family to gather around the gravesite. Masks are required at the gravesite service.

Denny was born on September 21, 1955 in Osage to Dale "Dean" Thompson and Irene Mathiesen Thompson. He had three brothers and one sister. He married the love of his life, Virginia "Ginger" Foth Thompson on July 12, 1975 at Sacred Heart Catholic Church in Osage.

Denny lived in Osage his entire life. He was a quiet, kind, thoughtful and gracious man with an outstanding smile that lit up any room he was in. He was also incredibly hard-working, working for the City of Osage for 44 years. At the time of his retirement in 2017, he was the longest-running employee of the City of Osage. He took great pride in this achievement.

Denny was a member of Sacred Heart Church in Osage and served on its cemetery board for many years. He loved nature, and was an avid birdwatcher, having a special affinity for cardinals. He also enjoyed traveling, doing house projects, and watching sports. He was a tried and true Minnesota Vikings fan. More than anything, he prioritized his precious time with his beloved family, friends and dogs, Ivy and Jasper.

He was preceded in death by his father Dean Thompson; two brothers Darwin Thompson and Douglas Thompson; parents-in-law, Thomas and Darlene Foth; and brother-in-law Fred Foth.

To plant trees in memory, please visit our Sympathy Store.
Published by Globe Gazette on Dec. 1, 2020.
MEMORIAL EVENTS
Dec
3
Graveside service
10:30a.m.
Osage Cemetery
GUEST BOOK
5 Entries
May the Lord comfort you and grant you peace. Denny touched our lives and he will be greatly missed. He is now in the loving arms of our Lord and the Blessed Mother.
John & Andrea Robinson
December 3, 2020
My heart is with you all. Holding you in our thoughts and prayers
Sally jenkins
December 2, 2020
You have been in my thoughts and prayers Ginger.
Lori Spitz
December 1, 2020
Condolences to Denny's family and friends. So very sorry for his passing. I know he will be missed and his memory will be cherished.
Deb and Ken Love
December 1, 2020
Dear Ginger and family, How I pray that you will all be comforted knowing Denny is in the arms of our loving Lord. May he rest in peace and enjoy the reunion of his brothers and dad.
julie niess vulk
December 1, 2020