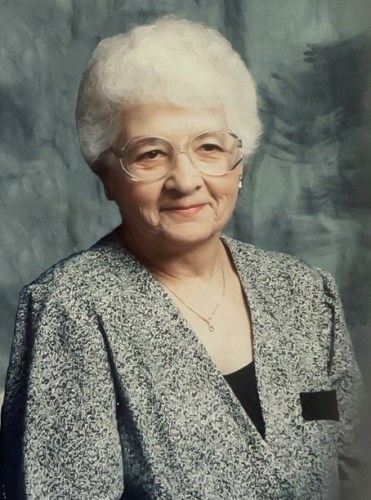 Doris Moore was born November 30, 1927 to James and Mary (Schmidt) Moore near Central City, IA. She attended and graduated from Riceville High School in 1945. Following graduation she worked for a short time as a secretary for the school before being united in marriage to Donald Adams at St Peters Catholic Church in New Haven, IA on January 11, 1947. Following their marriage they lived in Waverly and Cedar Rapids before moving back to the Riceville area where they farmed. Don later became a mail carrier for many years. In 1966 they built a home in McIntire, IA and in 2000 moved into Riceville. Doris was a homemaker and for a time worked for her brother Lester at the Locker in Riceville. She was a member of the Ladies Aid at St. Mels in McIntire and Immaculate Conception Catholic Church in Riceville, She was a member of the McIntire Womans Club and the Happy Hour Club. She volunteered for the local hospice and enjoyed hunting mushrooms and gardening into her 90's.

She was preceded in death by her parents, her husband Donald on May 3, 2019, 1 son Dean Adams, a great-granddaughter Brooke Elliott and 3 brothers and 4 sisters.

A private family Funeral Mass for Doris A. Adams will be held with a Celebration of Life to be held later in 2021. The funeral will be live streamed on Hindt-Hudek Funeral Home's Facebook page on Wednesday, December 9, 2020. Burial will be held at Calvary Cemetery in Riceville.

Online condolences may be left at Hindtfuneralhomes.com.