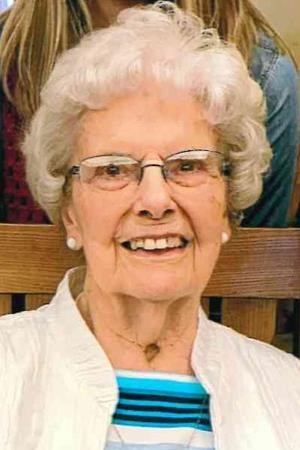 SHEFFIELD-Dorothy Jurgens, age 96, went to her heavenly home on Monday, March 29, 2021 at the Sheffield Care Center surrounded by family. Visitation will be 4:00pm to 6:00pm on Friday, April 2, 2021 at Sietsema-Atkinson Funeral Home in Hampton, Iowa. Additional visitation will be one hour prior to the funeral. Funeral service will be 10:30am Saturday, April 3, 2021 at Zion Reformed Church of rural Sheffield. Burial will immediately follow at the Zion Reformed Church cemetery.

Dorothy Grace (Rave) Jurgens was born October 1, 1924 at the family farm near Dell Rapids, SD. She was the youngest child of John J. and Mattie (Leuning) Rave. She was baptized and made profession of faith at The Reformed Church in Dell Rapids. She was the only one of the six children that got to attend and graduate from high school. She graduated with honors from Dell Rapids High School in 1943. January 30, 1945 was a special day as she was united in marriage to Calvin Jurgens in Little Rock, Iowa. They had 60 wonderful years together. They made their home near Chapin and later moved to farms near Latimer and Sheffield. In 1965 they purchased a farm near Thornton where she lived until she moved into Deerfield Assisted Living four years ago. Dorothy was a long-time member of Zion Reformed Church of rural Sheffield and was the oldest member. She was a member of Women of Zion, taught Sunday school and enjoyed her Tuesdays at church with her sewing ladies. She made many quilts and table runners for church and every one of her children, grandchildren and great-grandchildren. They are all blessed with handmade quilts as well as other hand work pieces she made including embroidery, cross stitch, and hardanger. Dorothy and Calvin farmed their entire life and she enjoyed all the activities including milking cows and gathering eggs. She always had a huge garden, which she was willing to share, and enjoyed the fruits of her labor. Everyone will remember delicious homemade bread, buns, and lots of baked goods. She always had chocolate chip cookies in the freezer and would make sure everyone had a good meal and no junk food. You were especially in her good graces if you stopped by to have tea. Dorothy loved hosting missionaries for mission Sunday and faithfully supported them through letters and prayer. One of her pastimes was reading and her favorite book was the Bible. Her greatest joy was her family, especially holding new grandchildren and great-grandchildren. She had 14 grandchildren, 22 great-grandchildren and 2 great-great grandchildren.

In lieu of flowers, memorials may be made to Zion Reformed Church or MercyOne North Iowa Hospice.