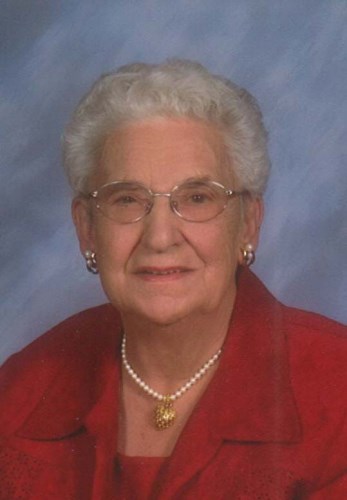 Gloria was born June 16, 1926 in Chicago, Illinois to Joseph and Alice (O'Hern) Myslewski. Gloria was raised by her maternal Grandparents, William and Margaret O'Hern of Britt. She attended Britt Community Schools and graduated in 1944.

Gloria married Wayne C. Dudgeon in 1946 to this union nine children were born. The couple farmed north of Britt from 1948-1966 before moving into town. Gloria was a fulltime wife, mother and homemaker before she joined the regular work force in the mid 1970s, first working at Nelson's Specialty Shop and later West View Care Center for eighteen years as a cook until she retired.

Gloria was a 50+ year member of Catholic Daughters. She belonged to the American Legion Auxiliary and was a Girl Scout leader. She took an active role as an advocate for those with intellectual disabilities to gain access to educational and social opportunities.

Gloria and Wayne attended all of their children's activities whether it was sports, music or drama. She enjoyed gardening, playing golf, and was a Red Hat Lady. Gloria belonged to various card clubs for many years including the Silver Stars. She could not resist a "garage sale" sign or visiting consignment stores. Gloria was a loyal friend and loved spending time with her lifelong friends.

She is survived by her children MaDonna, Catherine, Teresa, Mary Jane, Joanne, Loretta and John as well as seventeen grandchildren and 16 great-grandchildren.

She was preceded in death by her husband, Wayne, and two of her children Sandy and Tom.

In lieu of flowers or cards the family requests a donation be made in Gloria's name to the local food bank or the Britt West Hancock Alumni Scholarship. Cards may be sent to Ewing Funeral home at 178 Center St. W. Britt, Iowa 50423.