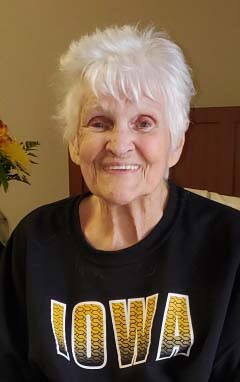 Funeral services for Gloria Hiscocks will be held Saturday, October 16, 2021 at 11:00 AM at Ewing Funeral Chapel 178 Center Street West in Britt. Burial will be in Evergreen Cemetery in Britt.

Gloria Joan was born October 8, 1934 to Richard and Ramona (Point) Plantz on the family farm near Pocahontas, Iowa. When she was 8, the family moved to Mallard, Iowa where Gloria attended school. She then attended Beauty School in Vinton, Iowa where she owned and operated Gloria's Beauty Shop and later in Rolfe and Plover. While living in the Plover area Gloria taught Sunday School at the Plover United Methodist Church.

In 1967, Gloria moved to Britt and bought the Red Rooster Bar and Grill. She also worked at several other places in Britt, her favorite being with Sally Hejlik, decorating for weddings. In her spare time she enjoyed reading Danelle Steel Books, watching football and basketball, especially the Hawkeyes and Colts, and Western movies.

Gloria and Donnie were married March 2, 1973, they enjoyed traveling to Hawaii, snorkeling in Cozumel and going to shows in Las Vegas. Gloria enjoyed camping with her family, there was never a dull moment, and she always made everyone laugh. She was proud to be a 30 year cancer survivor.