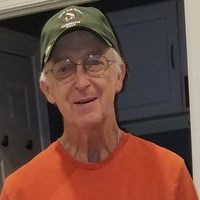 Jack R. McGrath, 74, of Aiken, SC, died peacefully at home on September 26. Jack was born on May 16, 1947 in Buffalo Center, IA to James and Mildred McGrath. He played baseball, basketball, and was in plays, band, and chorus at Thompson High School, graduating in 1965. He graduated from the University of Northern Iowa and taught in Postville and Cherokee, IA. In 1973 he married Terry Fassler and they moved to Broomfield. CO. To this union, a daughter, Lisa, was born. He taught math and computer science at Broomfield HS for 30 years and coached baseball, basketball, and golf. He was a positive influence on many students and was recognized as Teacher of the Year. When he retired from teaching, they moved to Aiken, SC where he enjoyed playing golf, and playing his keyboard and his many guitars. He is survived by his wife Terry, daughter Lisa (Chris) Jones, and grandson Kyler Jones, all of South Carolina. He is also survived by a sister-in-law, Kathy McGrath, of Kimberling City, MO, brother Gene (Karen) McGrath of Ankeny, IA, sister Gloria (Lee) Boggess of Marion, IA, and many nieces and nephews. He was preceded in death by his parents and a brother, Mike McGrath.

Published by Globe Gazette on Oct. 12, 2021.
To plant trees in memory, please visit the Sympathy Store.
MEMORIAL EVENTS
To offer your sympathy during this difficult time, you can now have memorial trees planted in a National Forest in memory of your loved one.
Funeral services provided by:
Shellhouse-Rivers Funeral Home & Crematory
MAKE A DONATION
MEMORIES & CONDOLENCES
Sponsored by Shellhouse-Rivers Funeral Home & Crematory.
0 Entries
Be the first to post a memory or condolences.