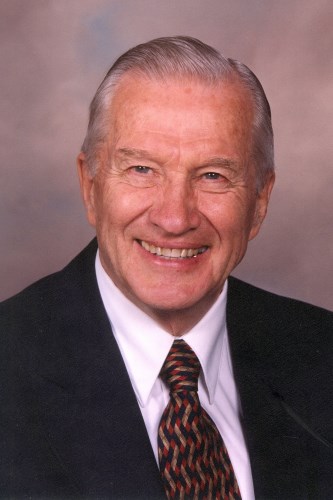 John Richard "Dick" Utne completed a flourishing journey on May 30, 2021 in La Jolla, California. That journey started in Fergus Falls, Minnesota on October 2, 1924. Joining him on this endeavor was his wife, Bernice on June 19, 1948.

Stops along the journey included pre-med programs at St. Olaf and Marquette Universities, and medical school at the University of Illinois. Two wars were a bump in the road. Dick served in the Navy during WW II and in the Korean War. He received a personal letter of commendation from General Matthew Ridgway and a Combat Medical Badge.

Secondary to his profession as a physician-specializing in radiology and radiation oncology-was his passion for photography. He built his own darkroom at age 12. Graduation from the New York Institute of Photography was another turn in his path. He noted that his greatest accomplishment was to attain the rank of Eagle Scout. He was the first of six family members to attain this honor in the Boy Scouts.

The combination of service and medicine crossed his path when he provided aid on the hospital ship, The Hope, for tours in Nicaragua and Tunisia.

Community involvement was paramount in his journey. Foremost was his commitment to art as the founding member of the Charles H. MacNider Art Museum. Commodore of the Clear Lake Yacht Club, Lion's Club, and service to the local school board were other examples of his dedication. He was active in the comings-and-goings of Trinity Lutheran Church. And recognition was awarded by several civic organizations for his pledge to the community.

To plant trees in memory, please visit our Sympathy Store.
Published by Globe Gazette on Jun. 11, 2021.
MEMORIAL EVENTS
No memorial events are currently scheduled.
To offer your sympathy during this difficult time, you can now have memorial trees planted in a National Forest in memory of your loved one.
MEMORIES & CONDOLENCES
2 Entries
I am so sorry for your loss. I was an x-ray student under him. He was so kind and funny. We shared the love of crossword puzzles on a daily basis. Rest In Peace, Dr. Utne.
Deanna Bain Frei
Friend
June 11, 2021
Dr. Utne was one of the radiologists I trained under way back in 66-68. Always respected and enjoyed him. His service on the ship Hope was an inspiration. Two things that stand out is: 1. I would say I'm trying and he would say kiddingly yes I know you're very trying. 2. He and his wife had us over to the cabin and took us sailing. We loved it. May all the great memories and the life he lived give you comfort in your loss.
Twylla (Volding) Baker
June 11, 2021