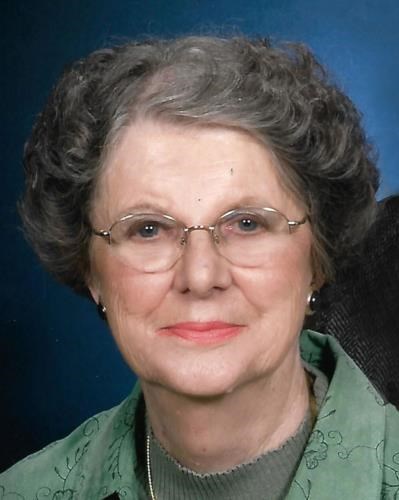 Memorials may be directed to Britt United Methodist Church or the Britt Food Bank.

Pearl Evelyn Smith, the daughter of Jacob and Marie Nagel, was born September 13, 1929 in Mason City. She graduated from Mason City High School in 1947 and continued her education at Mason City Junior College. On February 4, 1951 she was married to Harry Smith at Central Lutheran Church in Mason City. They lived in Oceanside, CA while Harry served in the U.S. Marines. They returned to Britt and lived on a farm southwest of town for the next 40 years. In the spring of 1992, Harry and Pearl moved to their new home in Britt.

Pearl was active in her community delivering Meals on Wheels, distributing Poppies, decorating graves on Memorial Day, volunteering at Hancock County Memorial Hospital, and being a regular blood donor. She was a member of the Britt United Methodist Church, UMW (past president), active in the church quilting and sewing group, and was a Bible school teacher. She also belonged to the Britt American Legion Auxiliary (past president and past county president), 3 G's Homemakers Club (past president and charter member), Britt Women's Club (past president and member), Hancock County Hospital Auxiliary (life member), Hancock County Historical Society (past curator for 9 years and life member), and Order of Eastern Star (past Worthy Matron). Pearl was also a member of "TOPS" Britt Chapter #318, Royal Neighbors, Britt Chairman of the Red Cross Bloodmobile (7 years) and was a 4-H and Cub Scout Leader.