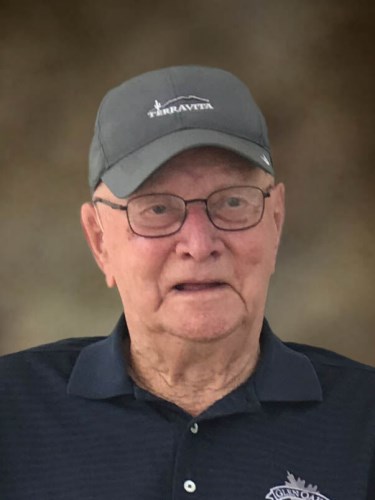 Rodney John Vellinga, age 100, passed away on October 25, 2020, at the home of his son, Tim Vellinga, in Lamy, New Mexico. Rodney was born on March 3, 1920, in West Branch Township, Iowa, the son of Henry and Dena Vellinga. He married Irene Van Wyk in 1943 and, together, they had 7 children. The family lived on a farm near Ireton, and later, on a farm near Alton. The family moved into Orange City in 1964 when Rodney began work at the Orange City Elevator. Rodney's greatest accomplishment was being a loving father and grandfather. In small and big ways, he gave his children, grandchildren, and great-grandchildren many stories of grace and courage. Those stories formed our hearts, our vision and our actions. He will be forever remembered for his kindness and gentleness. Wonderful memories of Grandpa's grandchildren include his amazingly consistent golf swing, his moped gang cruising the town (and letting the kids take an occasional spin ), the wooden clocks he made for each of them, the dollar he gave them if they would say the Lord's Prayer at big family dinners. He was a dedicated caregiver when Irene was ill. A highlight of his life was a trip to Washington, DC, on an Honor Flight in 2009. Rodney and Irene spent many winters in South Texas where they made life-long friends. Rodney is survived by his brother, Bob Vellinga, sister-in-law, Leola TeGrotenhuis, sons Rodney D. Vellinga (Cathy), of Sioux City, David Vellinga (Nancy), of Des Moines, Mark Vellinga (Miriam), of Orange City, Tim Vellinga (Jennifer), of Lamy, New Mexico, and daughters Adriana Attleson, of Mason CIty, and Deb Netten (Ron), of Storm Lake. He is also survived by 18 grandchildren and 44 great grandchildren. He was preceded in death by both parents, sisters Bertha VanderStoep, Helen Korver, Nell Mouw, Wilma Klopfenstein, and brothers John Vellinga, and Harvey Vellinga, son Steven in 1968, his wife, Irene, in 2013, and son-in-law Dick Attleson in 2017.

There will be a private family service on Saturday, October 31, at 1:30 p.m. at Trinity Reformed Church in Orange City, Iowa, with Oolman Funeral Home presiding. A live stream service is available for the public on their website, www.oolman.com . In lieu of flowers, memorials may be given to Prairie Ridge Care Center in Orange City.

To plant trees in memory, please visit our Sympathy Store.
Published by Globe Gazette from Oct. 29 to Nov. 1, 2020.
MEMORIAL EVENTS
Oct
31
Service
1:30p.m.
Trinity Reformed Church
, Orange City, Iowa
Funeral services provided by:
Oolman Funeral Home
GUEST BOOK
4 Entries
I have such beautiful memories of your Dad --- Everything from taking us home from Sunday School, playing at each others farms, his laughter, ruining two sleds in one day, etc.
When he chose the ending song after Sunday School, it was often "In My Heart There Rings a Melody." I've been singing and playing that in my head this whole week!!
My sympathies, prayers, and love to all of you.
Milly (Van Roekel) Vande Kieft
Milly Vande Kieft
Friend
October 31, 2020
sending hugs & prayers for peace as you gather there in Orange City. He was a handsome 100 yr old.
Ken & Marlene Shadle.
October 30, 2020
Thoughts and prayers to the entire Vellinga family. What a great life to be celebrating. The Ireton part of your journey remembers and is thinking of your wonderful family.
Doug Huitink
October 30, 2020
I remember when he would pick up my father, George Boelman, to go to work at the elevator in Orange City.
Dave Boelman
October 29, 2020