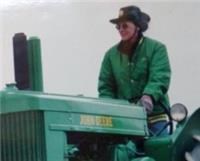 Pat was proud to have started her life in a barn in North Bend, WA. The family moved before the birth of their second daughter to a row house nearby.

Pat studied highland dancing and competed in dance competitions. In 1958, the family moved to Tacoma, WA, where international folk dancing became a part of her life.

After graduation from Wilson High School, Pat worked at a plywood factory. She worked on the stage crews for several productions at Tacoma Little Theatre and continued to perform highland dances with the Clan Gordon Pipe Band.

She met her husband, Spike, through both of these venues. They married and lived in Tacoma until shortly after the birth of their son, Iain. They moved to Sedro-Woolley before they had their second son, Robert.

Pat loved participating in PSAT&MA Tractor pulls, was a paraprofessional with the Sedro-Woolley School District, an active member of the Old Skagit Gun Club, the Cascade Two Cylinder Club, and the Sedro-Woolley Alumni and Schools Foundation.
She was preceded in death by her husband of 37 years, Reno W. "Spike" Odlin (Sedro-Woolley and Louisiana) and her parents, Robert N. and Allene R. Mogensen (Tacoma, WA).

In lieu of flowers or other memorial gestures, the family requests that donations be made to a prize purse for Pibroch judging at your local highland games, the Old Skagit Gun Club, the Sedro-Woolley Alumni and Schools Foundation or one's favorite charity in Pat's name.

Arrangements are under the care of Lemley Chapel.

Share your memories of Pat and sign the online guest register at www.lemleychapel.com.
Lemley Chapel
To plant trees in memory, please visit our Sympathy Store.
Published by Skagit Valley Herald on May 31, 2017.
MEMORIAL EVENTS
No memorial events are currently scheduled.
To offer your sympathy during this difficult time, you can now have memorial trees planted in a National Forest in memory of your loved one.
Funeral services provided by:
Lemley Chapel
MAKE A DONATION
MEMORIES & CONDOLENCES
0 Entries
Be the first to post a memory or condolences.