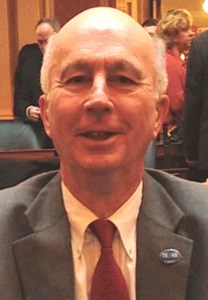 Chris Daniel was so many things to so many people. He was a best friend and soulmate to Elena Daniel, his wife of 52 years. He was a devoted and loving dad to his daughters, Diana Daniel and Kristin Daniel, and a proud father-in-law to Eric Somdahl. There are no words to describe how much he will be missed.

Chris was the son of Kit and Patsy Daniel. He is survived by his sister, Susan Torborg, and his brothers, Sam Daniel and John Daniel.

He was principled, fair minded, honest, and wise. He enjoyed being a positive role model for five children who brought so much joy to his life. He was a grandfather figure to Lucas Anderson, a loving and involved great uncle to Lauren Torborg and Cori Jane Schweiger, and a wonderful neighbor and mentor to Jenita Theodore and Jerusha Theodore. His hope for each of them was that they continue to strive to be the best they can be.

Chris graduated from Hampden-Sydney College in 1968 with a bachelor's degree in History. He earned a master's degree in Social Studies Education from the University of Virginia in 1974. He was a classroom teacher for 13 years in Pittsylvania County.

As a freshman at Hampden-Sydney, Chris volunteered as a tutor for Black students in Prince Edward County when efforts to desegregate lead to the closure of public schools. There he learned the true value of education and the democratic process. That realization was the beginning of a passion that continued until days before his death.

Those who knew Chris knew they could count on him. His passion and enthusiasm for his work continued after retirement. He served as chair of the Danville Democratic Committee. A highlight of his work was being appointed as an elector to the 2012 Electoral College of Virginia. He strongly believed in the right to vote. He volunteered to help restore civil and voting rights to those who had paid their debts to society. He helped with voter registration and transportation to the polls.

Chris was a strong supporter of Virginia Organizing (https://virginia-organizing.org/), Danville Life Saving Crew, God's Storehouse and Danville's chapter of Habitat for Humanity. Chris would be honored to have donations made in his memory to any of those organizations.

To honor Chris, his family asks that you donate blood, vote, and get vaccinated to protect yourself and others from COVID. His family also thanks everyone for their support, tributes, cards, and messages.

Due to concerns surrounding COVID, a memorial service will be held at a later date.

Townes Funeral Home and Crematory, 215 West Main Street, is serving the Daniel family. Online condolences can be made at www.townesfuneralhome.com

Published by Danville and Rockingham County on Sep. 19, 2021.
To plant trees in memory, please visit the Sympathy Store.
MEMORIAL EVENTS
To offer your sympathy during this difficult time, you can now have memorial trees planted in a National Forest in memory of your loved one.
Funeral services provided by:
Townes Funeral Home & Crematory
MAKE A DONATION
Please consider a donation as requested by the family.
MEMORIES & CONDOLENCES
Sponsored by Townes Funeral Home & Crematory.
8 Entries
It was an honor to work on the Danville Democratic Committee with Chris Daniel. He was a fine man and will very much missed.
Phyllis J Whipple
September 21, 2021
I am so sorry to hear of Mr. Daniels passing. He was one of the best teachers I ever had (8th Grade Blairs Jr. High 1973). To his family, please accept my sincerest condolences.
Ron Moss
September 20, 2021
Elena, I am so sorry to hear of Chris´ passing. Chris was a hardworking educator and advocate just like you. One visual is remembering Kristen and Chris on that trike built for two. Please accept my deepest condolences.
Michael Stowe
Friend
September 19, 2021
Chris was a fine man and true educator. Often our jobs put us on opposite sides; however, Chris and I had an excellent relationship. I had great admiration for him. He will be missed; proud to have known him!
Paul Thompson
September 19, 2021
Sending prayers to the family during this difficult time. For Kristen, Chipper sends hugs (PT department at hospitals). Chris was truly a kind and devoted father.
Ruth Meadors
Work
September 19, 2021
My thoughts and prayers are with the Daniel family.
Jan Gillespie Clark
September 19, 2021
I didn´t know Mr Daniel personally, but from reading his obituary, I can tell he was good..good..man. May he Rest In Peace...I will be making a donation in memory of him to Habitat for Humanity.
Kathy M Jefferson
September 19, 2021
A man willing to share his vast wisdom and know-how with anyone willing to listen and learn. His signature calm-resolve proved invaluable to me years ago as I lead a small group of DPS support staffers in securing health and retirement benefits. His example of community activism is reknown.I considered him both a gentle giant and a quiet genius. Prayers 4 his family.
Mary Massie Barnes
Other
September 19, 2021
Showing 1 - 8 of 8 results